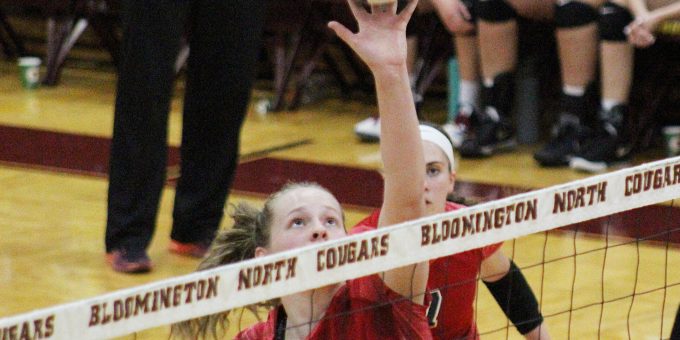 BLOOMINGTON – For several moments, the fires of hope, the flames of an upset, the spark of something special flickered within Bedford North Lawrence. Could it be, could the Stars start the postseason with a stunning triumph?

Alas, Martinsville doused that thought. The Artesians turned on the hose, quenched that blaze, and swept away to a four-set victory in the first round of the Class 4A sectional at Bloomington North on Thursday night.

Martinsville (17-10) shook off the early surprise and overpowered the Stars with the net force of Mackenzie Martin (26 kills) and ball movement of setter and server deluxe Grace Reynolds (50 assists). Once they clicked, BNL cracked.

“Once Mackenzie got hot, we told Grace to set her until they stopped her,” Martinsville coach Kayla Back said. “They didn’t really stop her.”

No, they did not, particularly in the fourth set. BNL had a 12-5 advantage in that one and was threatening to extend the match to a sudden-death finale. But Martin did all the killing, hammering down six during an impressive flurry as the Artesians powered in front and pulled away.

The Stars, starting three sophomore and two freshmen and playing without a senior on the roster, were not the nervous kids at first. Martinsville was. BNL battled back from a 10-6 hole, pulled even at 17-17, then scored four straight points on Maddy Bennett’s serve. Two Martinsville mistakes and a Carlee Kern kill that caught the net and the line finished off that set.

“We get off to a good start and just can’t sustain that,” BNL coach Jordan Robbins said. “We played one set really well, in very match we competed in, but we can’t sustain. I know we’re young, and it is what it is, but it doesn’t mean we can’t play hard. It’s a tough pill to swallow.”

“We just made a ton of errors,” Back said. “You always come into sectionals and everybody is jittery. We didn’t calm down quick enough. Basically, we cleaned that up and we were fine.”

Martinsville dominated the middle games, cruising to an 8-2 lead in the second and scoring 9 consecutive points (on Reynolds’ serve) in the third. BNL blasted out in the fourth as Annie Waggoner scored twice on well-timed tips. But then Martin went to work.

The Artesians had conquered BNL during the regular season, winning a tough two-setter in the BNL Invitational on Sept. 14. They did not take BNL’s lowly record as a chance to lay low.

“In the sectional every game is going to be close,” Back said. “Nobody is coming in to have their season end, so you can’t overlook anybody. They plays their butts off and made a lot of scrappy plays.”

“I’m proud of them for the season we had,” Robbins said. “It’s been a long season and they stuck with me. Some teams would have given up and not shown up. It says a lot about the kids we have.

“We will have four seniors next year, and senior leadership has to take place. It’s all of them together. The good thing about this group is they’ve played together since they were little bitty, so they’re comfortable with each other. Now it’s confidence in themselves that will pay off.”

The first semifinal will feature Columbus East and Bloomington North at 11 a.m. The final is set for Saturday at 7 p.m.