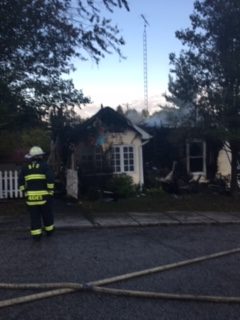 On October 17, at 1:27 a.m, the Bedford Fire Department was dispatched to a confirmed structure fire at 402 16th Street.

Nine firefighters from three stations responded and on arrival found heavy fire and smoke coming through the roof of a two-story single-family dwelling.

The occupants, Sean Prewitt and Amanda Donahue, were unaware of the fire and were alerted by an individual driving down 16th street.

They self-evacuated safely without injury. The residence sustained heavy damage and is determined to be a total loss.

The cause of the fire at this time is still under investigation. The identity of the individual that took the time to stop and alert Sean and Amanda is unknown.

On their behalf and the Bedford Fire Department, I would like to extend a heartfelt thank you.

“I was asleep on the couch when a man started banging on our door to alert us of the blaze. When we were exiting the house, flames were already overhead in the roof. The fire was at our back porch area. We are so thankful for the gentleman who woke us up this morning,” said Amanda Donahue.

“Our neighbor Stephanie Hughes called 9-1-1 to report the blaze. We did not have smoke detectors in the home,” said Donahue.