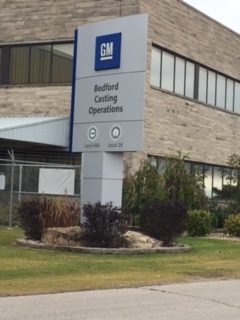 (BEDFORD) – General Motors and union leaders have reached a tentative deal on a new labor contract that could end the United Auto Workers’ monthlong strike against the automaker, the UAW said Wednesday.

Bedford workers are hopeful that this will end the month-long strike that shut down more than 30 General Motor factories in the United States.

Details of the proposed deal were not immediately available, however, the union’s roughly 48,000 members with GM are expected to receive raises and bonuses as part of the accord.

“The number one priority of the national negotiation team has been to secure a strong and fair contract that our members deserve,” UAW Vice President Terry Dittes, director of the UAW GM department, said in a statement. The UAW’s national negotiating team is recommending that union members take the deal.

Dittes said he is refraining from discussing details until local union leaders can meet in Detroit on Thursday to review the proposed tentative agreement.

Local UAW president Kevin Hutchinson and the shop stewards have left Bedford to go to Detroit and were unavailable for comment.

“We hope it brings work back from Mexico and China and gets seniority for our temporary workers,” Steve Haefke, of Bloomington stated.

The deal is likely about two weeks away from being finalized by rank-and-file union members. The local leaders will also decide whether workers will remain on picket lines or return to work during the voting process.

If the local UAW leaders approve the proposed contract, GM’s unionized workforce must then vote on it. The new contract, if ratified by members, will be used as a template by the union for negotiations with Ford and Fiat Chrysler.

Kristee Terry moved to Bedford after the Lordstown Plant closed in 2018.

“I am glad we stood our ground,” she added.

On November 26, 2018, the Lordstown Plant was allocated. It was a rough year for Kristee Terry. She found her mother was diagnosed with cancer on December 6, 2018 and on March 5th the Lordstown plant was closed. Tehn on July 29th she moved to Bedford.

“We are trying to get better health care, increase wages for everybody, and get temporary workers on permanently,” she added.” I got laid off after six months after being a temporary worker and did not get rehired until a year later. After ninety days, I finally got full-time employment.”

The work stoppage has rippled throughout the automaker’s North American operations, causing thousands of additional layoffs. Bank of America analysts estimates GM has lost more than $2 billion due to the strike.