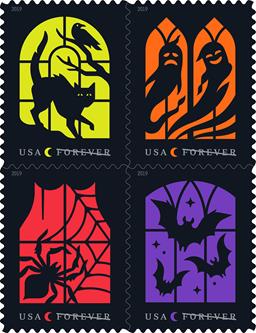 The Spooky Silhouettes stamps feature digital illustrations with Halloween motifs rendered as black silhouettes in eerily backlit windows. The images include a cat with an arched back beneath a raven perched on a bare tree branch, all against a yellowish-green background; two ghosts against an orange background; a spider and a web against a red background; and three bats against a purple background. These newly available stamps are Forever stamps, which are always equal in value to the current First-Class Mail 1-ounce price.

“We sincerely appreciate the Postal Service for using the 30th anniversary of the Milford Pumpkin Festival for this stamp release,” said Mark Bender, Milford town administrator.

“These commemorative Forever stamps highlight the fact that Halloween is the time of year that we can delight in the things that scare us”, said Marc McCrery, the event’s dedicating official and vice president, mail entry and payment technology, U.S. Postal Service.  “It’s our hope that these new stamps will contribute to this season’s celebrations by not only adding a little spookiness to your cards and letters, but also reminding you of the specialness of the season.”

McCrery and Bender were joined to unveil the stamps by Matthew Burdette, editor-in-chief of The Telegraph, who served as master of ceremonies; Jeff Belanger, acclaimed author and journalist; Manya Ziemiecki, sophomore vocalist at Milford High School; and Simon Brooks, Halloween storyteller.

News of the Spooky Silhouettes stamps can be shared using the hashtag #HalloweenStamps.

Brought to North America by immigrants from Ireland and Scotland, Halloween soon became a distinctively American celebration that transcended social boundaries and ethnic origin. In the early 20th century, the holiday was often a time for pranks and rowdiness, but communities and civic organizations worked to rein in those tendencies.

After World War II, widespread enthusiasm for trick-or-treating gave the holiday a youthful emphasis.  Since the 1970s, adults have increasingly joined the festivities: a 2014 survey shows that nearly 67 percent of the American population celebrates Halloween.

Customers may purchase the Spooky Silhouettes Forever stamps at The Postal Store at usps.com/shopstamps, by calling 800-STAMP-24 (800-782-6724) and at Post Office facilities nationwide. A variety of stamps and collectibles also are available at ebay.com/stamps.

Customers may purchase stamps and other philatelic products through The Postal Store at usps.com/shopstamps, by calling 800-STAMP24 (800-782-6724), by mail through USA Philatelic, or at Post Office locations nationwide. Forever stamps will always be equal in value to the current First-Class Mail 1‑ounce price. A video of the ceremony will be available on facebook.com/usps.