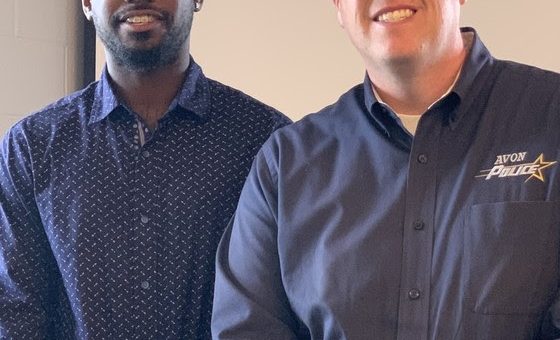 (PENDELTON) – When Rameil Pitamber was arrested for robbing a Little Caesar’s Pizza store at gunpoint in January of 2013, he never expected the arresting officer would become his friend. However, years later, that is exactly what happened.

On Thursday of last week (Oct. 10th), Rameil and the officer who arrested him years ago, Brian Nugent, now the Deputy Chief of the Avon Police Department, visited Pendleton Juvenile Correctional Facility (PNJ) to share their story of forgiveness, redemption and trust.

At the age of 17, Rameil (now 24) was sentenced on January 29, 2013 to serve 11 years at an Indiana Department of Correction facility, the result of his conviction for the armed robbery.  Over the course of his sentence, he spent time at the Wabash Valley Correctional and the Putnamville Correctional Facilities.  Rameil freely admits his time in prison allowed for reflection on his past decisions, as well as accepting responsibility for his actions, and led him to be a model prisoner.  His excellent conduct and decisions he was acting on to change the direction of his life resulted in his release from prison after serving four years of his sentence.

Now, this October fall day, Rameil Pitamber was standing in front of a group of incarcerated youth, with Dep. Chief Brian Nugent, where Rameil told his audience, “Your life is your responsibility.”

Then Rameil shared his story:

It was just another normal day of work at the Goodwill Store when in walked Dep. Chief Brian Nugent.  Brian had stopped in to make a donation.  Rameil siezed the moment, approached Brian, and asked two questions: “Do you remember me?” and, “Would you become my mentor?” This was the start of Ramiel’s and Brian’s remarkable journey.

From that moment, Rameil and Nugent began to work together. They meet often, share lunch and help each other. Now Rameil has received his driver’s license and currently operates his own HVAC business.

Rameil told his audience, “I knew all of the things to do to get me sent back to prison, but didn’t know the things I needed to do to stay out of prison. I thought who better to learn from then the person who knows exactly how to not get arrested.”

Rameil and Nugent admit their bond is not common, but challenged the youth they were sharing their story with to accept those with differences from their own. “Make a decision everyday on how you are going to live,” said Dep. Chief Nugent. “You control your own life.”

Rameil and Brian never expected their story to gain any attention, but it has.  It has aired on national news and Rameil was invited to speak with the New Orleans Chief of Police to discuss relieving tension between police and the community.

Chaplain Shawn O’Connor, who offers guidance to incarcerated youth, commented, “Having Rameil and Brian engaging youth here with their individual and collective perspectives presents fresh possibilities for reconciliation.” O’Connor continued, “Their story shows what is possible when we commit to respecting ourselves enough to be respectable and risk caring for each other enough to help each other seek well being.”

Ramiel’s future continues to look bright, the result of his hard work, and the mentoring of a caring police officer.