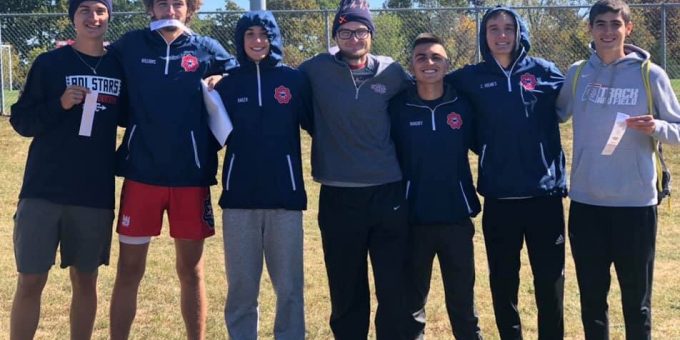 (BEDFORD) – Bedford North Lawrence outran its bad memories and raced into the second round of the IHSAA state tournament series.

After failing to advance from last year’s sectional on their home course, the Stars earned some redemption on Saturday morning, finishing third in the boys meet to qualify for the regional.

The top five teams, plus the top 10 individuals who were not members of advancing teams, earned a spot in the regional on Oct. 19.

In the girls meet, BNL settled for seventh, missing the fifth spot by a mere seven points, but the Stars sent three individuals into the regional race.

Motivation powered the Stars to vindication. Last year, stunned by the sixth-place conclusion, they vowed to return to expected form and spent all summer chasing that goal. They got there with 114 points, finishing behind No.6 Bloomington South (24) and No.19 Bloomington North (52).

“For me, it was a down point,” BNL coach Jon Calhoun recalled. “I saw it in their faces. We set a goal, talked about what we had to do to get third, and we followed it to a ‘T’. I’m proud of what they accomplished.

“The key was not letting what happened last year happen again. They stayed calm, didn’t get flustered. They were as calm and loose as I’ve seen them all year.”

The Stars were loose and fast with their strides and times. Cooper Holmes set the pace for the Stars, finishing 10th in 16:45.97 and earning a spot on the school’s all-time Top 25 board for best times on the home course. He thought about his past races (breaking 20 minutes for the first time in the sectional three years ago, and last year’s disappointment) during his 5K romp.

“Last year lit a fire under our butts,” Holmes said. “We kept reminding ourselves that we had the potential to do what we did today, something special.”

“They really stepped up and helped us succeed,” Calhoun said.

North’s Paul Rushton was the individual champion in 15:51.30.

In the girls meet, BNL totaled 161 points but came up short in the team competition. No.5 Bloomington North easily won the team title with 29 points while No.12 Bloomington South scored 52. The real battle was for spots 4-5 as Orleans (which totaled 149 and qualified for the regional for the first time in school history) and Mitchell (154) secured those spots.

“We knew it would be close,” BNL coach Jill Vance said. “It’s tough when you’re really close, but you didn’t make it. Close enough isn’t enough.”

“I’m really proud of Grace,” Vance said. “She ran a really good race. Lindley gets another shot in the regional, and Myra (battling an injury all season) was a testament to her fitness and ability. It’s been a tough season for injuries.”

Edgewood’s Annalyssa Crain was the race winner in 18:04.73, over a minute ahead of her nearest pursuer.

BNL will host the regional, which will include qualifiers from the sectional at Terre Haute North, with the top 5 teams and top 10 individuals who are not members of advancing teams earning a trip to the semistate at Brown County.