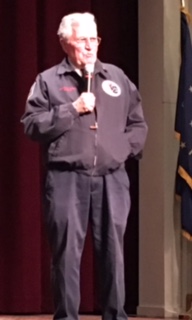 (MITCHELL) – The 2019 Galactic Gathering in Mitchell brought people from around the country and even from around the world to Saturday’s event. The event was set to feature both actors Joel Johnstone, who played Gus Grissom in the ABC drama series “The Astronaut Wives Club” and Dr. Harrison Hagan Schmitt.

Due to the California wildfires in the Los Angles area, Mr. Johnstone thought it was appropriate to stay with his family. Johnstone sent heartfelt apologies to the attendees via a message that was played during the opening of the program at the Mitchell Opera House on Saturday evening.

The Galactic Event started at “Gus” Grissom’s Boyhood Home which offered tours of the home, along with a memorial to Gus’s wife, Betty. A memorial to Betty was created in honor of her at the Boyhood home.

Later in the afternoon photo opportunities were available with Dr. Harrison Schmitt. Two of the attendees came from Ireland just to meet Dr. Schmitt.  “I have seen 6 of the 12 Apollo Astronauts and to see the boyhood home of Gus Grissom was just an added bonus,” stated Shane Hannon. Shane’s father Mick made the trip from Ireland and stayed at Spring Mill State Park over the weekend.

“I am pretty much, a space geek. I have been waiting pretty much for most of my life to meet one of the Apollo astronauts. I was able to watch the first Apollo 16 landing. And the decent of the Lunar module decent. My father was a part of the Apollo program as it was starting to wind down. To be here today is just awesome,” says Scott Blake Tyler Mountain, West Virginia.

“I can remember Sputnik and I did freelance photography for the Apollo mission. I was part of the Apollo 17 Space press group,” said Joe Druecker from Columbus, Ohio. “ It is amazing that this gentlemen here has spent the most time of anyone on the moon. Almost three days; it is just fascinating to me,” Druecker added.

Samantha Mundell from Gosport, England could not attend Saturday’s event, so her family took a picture of a sign so she could feel a part of the event. Mundell is a geologist herself and has always admired Dr. Schimmt’s work.

“I have attended at least three times so far, and just loved the way they honored Betty today,” stated Lois Honeycutt of Columbia, Missouri.

Some of the attendees to the Gus’s Boyhood Home and the evening presentation at the Mitchell Opera House included 25 Space Hipsters.

On Saturday evening, Mark Bryant asked various questions to Dr. Schmitt who elaborated on what it was like to train for space flight as well as the differences in reality once you were actually doing it. Dr. Schmitt stated that the biggest issue is the training could not really prepare you for the lift-off.

Dr. Schmitt also talked about the two-week quarantine prior to the lift-off and following space travel. He also discussed some of the things that they ate while in space and some of the experiments they conducted that helped improve the technology we see today.

Following Mark Bryant’s question and answer session, he allowed the audience to ask their own questions about the space program and his time on the moon.

He was asked who his favorite school teacher was, and he replied ‘ his mother’. His mother has an associates and masters degree from Peabody College. As far as a public school teacher, he mentioned his third- grade teacher, Mrs. Lucas.

He encouraged the young people to do good in mathematics.

When asked by a female high school student in the class what advice would you give to one inspiring to be an astronaut he replied, “Broaden your horizons, and education. Continuously be athletic, be a part of several activities, and teamwork. Be all you can be.”

Asked by Lee Hutchinson, the school teacher of Charlie Walker, whether the space program should be continued he said ‘yes’ and that the private sector can be just as good as the government-run program. “Both the U.S. President and Vice President know the importance and have given NASA the direction to get it done. Now, it’s in the hands of NASA to do it,” Schmitt commented.

Getting to Mars will be more of a challenge than getting to the moon. One of the things was communication, to which he added communication from earth to the moon was just a matter of a seconds. Communication with Mars and back could take several hours. That is one of the many things that will have to work on.

There were over 850,000 samples taken from the six missions to the moon, which is currently helping us to figure out new things.

Dr. Harrison Hagan Schmitt was born in New Mexico and grew up in the American West.

He received a Bachelor of Science degree from CalTech and a PhD. in geology from Harvard based on fieldwork in Norway as a Fulbright Scholar and National Science Foundation Post-Doctorate Fellow.

He is the only scientist and the last of 12 men to step on the Moon.

Schmitt was elected to the United States Senate from New Mexico in 1976. As part of his consulting business in the aerospace and earth science, he chaired the NASA Advisory Council from 2005-2008.

Schmitt has received numerous honorary degrees from the United States and Canadian Universities. From 1996-2004, he taught “Resources from Space” at the University’s Department of Engineering. Schmitt authored “Return to the Moon: Exploration, Enterprise, and Energy in the Human Exploration of Space” and since 1964, he has published numerous scientific papers related to lunar and planetary geology. He travels extensively internationally as well as domestically. Schmitt lives with his family in the American intermountain West.