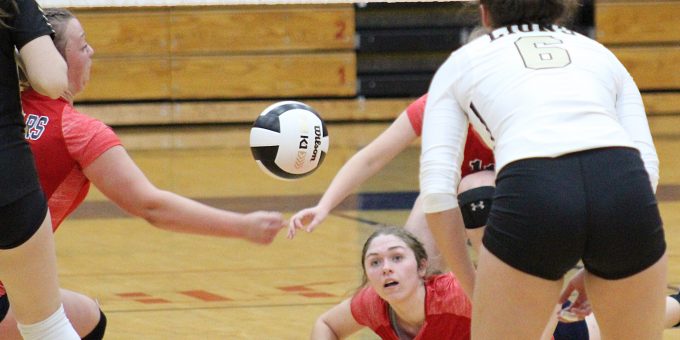 (BEDFORD) – On Teacher Appreciation Night, honoring those educators who have made an impact in the classroom, Bedford North Lawrence learned an important lesson: finish what you started.

After a brilliant first set, the Stars (4-21) could neither sustain that momentum nor duplicate that effort as Class A No.3 Loogootee rallied for a four-set triumph to end the regular season on Thursday night.

BNL played its best set of the season to take the opener, battling back from an early 9-4 deficit (which would be a trend) and taking command with Annie Waggoner’s 6-point scoring run. Carlee Kern dominated the net, cracking down defensive blocks and offensive kills to spark the surge.

And then, during the changeover from bench to bench, BNL changed back to old form, falling behind quickly. This time, there was no recovery, no spurt, no comeback.

“We did a lot of good things,” BNL coach Jordan Robbin said. “That first set, they should be proud. We did so many good things, played together, ran an offense . . .”

“But we can’t make it last,” she finished. “This isn’t a one-set thing. Unfortunately.”

The Lions roared to an 8-3 lead in Set 2 and were never threatened. They were on the attack again in Set 3, although BNL did scramble back. The Stars forced an 11-11 deadlock and trailed by a single points several times during the midpoint of the set. But every time they had an opportunity to pull even and make Loogootee sweat, they faltered. Errors were crucial during those pivotal moments.

Loogootee blasted out 8-2 in Set 4. BNL once again fought back, fighting within 2 points, but Emily Wade’s six-point service run powered the Lions to a 21-14 advantage and they closed out from that point.

“The girls got a little more focused, with a little more determination,” Loogootee coach Shelly Lengacher said. “They decided they weren’t going to let balls hit the floor. We got a little smarter with some of our hits.”

“Loogootee always serves tough, they’re always scrappy,” Robbins said. “But why get down? We should be ready to play and confident in what we’re doing, not just one set.”

BNL will face Martinsville in the first round of the IHSAA sectional at Bloomington North on Oct. 17. The Artesians (16-10) closed with a 3-set sweep of Terre Haute South on Thursday, and they already own a 25-22, 26-24 win over the Stars during the BNL Invitational on Sept. 14.