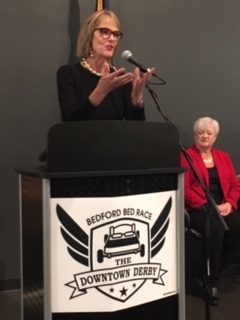 ( BEDFORD) – Today, Indiana Lt. Governor Suzanne Crouch made stops in Edinburg, and Bedford this morning, highlighting the progress of their downtown.

Around 11:00 a.m. this morning, Bedford Revtialization Inc. hosted the visit of Lt. Governor at the StoneGate Arts and Education Center in Brinegar Hall.

Mayor Girgis, highlighted some of the projects that were completed since the 2014 Downtown Revitalization projects began.  Mayor Girgis noting that Bloomington and French Lick projects where approved which centered on one theme.

Bedford was not approved for its first Stellar Proposal but went back to the drawing board to finally be approved with several projects that now have been completed.

“ The governor and I love visiting these small rural communities because they are the heartbeat of Indiana. And they are the heartbeat of a thriving and growing economy. The benefits of the revitalization of  downtowns are well documented for state and local economies.”  Said Lt. Governor Crouch. “ When you invest in your downtown, it creates jobs, increases property values and brings tourists to their downtown,” Crouch added.

What has been done in Edinburgh with the dedication of five new businesses; They are attracting that kind of economy to the downtown.  And seeing what they are being here in Bedford with the depot, is phenomenal, making a quality of life  attraction for the community, and what they are doing with this building ( StoneGate Education Center) and preparing the young people for the future in Indiana and preparing them for success.”  Crouch continued.

“ It is great to see the completion of some of these projects. When you have good leadership at the local level; when you have strong leadership and collaboration the state likes to come along the leadership and take the community to the next level. And we are proud of what Bedford has done.” Crouch concluded.

Susan Gales BRI president,  noted some of the various political leaders, business community and volunteers who have worked tirelessly to make these projects happen.

Following the remarks by Susan Gales, Mayor Girgis and Lt. Governor Crouch the unveiling of the historical marker at the depot were completed. The Lt. Governor then took a tour of the Depot with Mayor Girgis explaining the vision of the depot project, Arts Center across the street, and then toured the Stonegate Education and Arts Center.

Lt. Governor Suzanne Crouch was born and raised in Evansville, Indiana. She previously served as Indiana’s Auditor from January 2014 through December 2016.

Before becoming an auditor, she served as the state representative for the Hoosier House District 78, which encompasses parts of Vanderburgh and Warrick Counties. She was elected to the seat in 2005 and served as the Vice-Chairman of the Ways and Means Committee and on the Public Health Committee.

Throughout her years of public service, Suzanne had been focused and committed to programs and services for people with disabilities. She was honored to receive the 2012 Public Policy Award from the ARC of Indiana for her work with people with disabilities and was named Legislator of the year in 2011 by the Indiana Association of Rehabilitation Facilities.

Prior to serving in the House of Representatives, Suzanne spent eight years as an auditor of Vanderburgh County. During that time, her office received its first clean bill of health in decades from the State Board of Accounts. She then went on to serve as Vanderburgh County Commissioner until joining the House. She presided as president of that body during her third year in office.

This week, Bedford has celebrated Downtown Derby Week which included the following events:

The downtown celebration, sponsored by Bedford Revitalization Inc., will showcase what downtown Bedford has to offer to residents and visitors.

Among the highlights of the week are historical tours; a bed race; live music; shopping on the square; fireside stories; a free movie; farmer’s market; a chili cookoff and more.

​Stroll the square and take in the beautiful window displays. The winning storefront display will be announced Saturday, October 12th

​Shop at participating downtown merchants all week long and be entered into our drawing for your chance to win a Downtown Merchants gift basket valued at more than $100. It’s easy to earn an entry just visit a downtown store. If you purchase an item you will earn two entries.

Visit every day and at multiple locations for your best chances to win. The winner will be announced Saturday, October 12th.

Meet in front of the Lawrence County Museum to take a guided architectural and historical tour of downtown Bedford. The tour will take about an hour. A handout with historical photos and information will be provided. Please RSVP Teena Ligman at 812-849-1090 so there will be enough handout. The is no cost but donations would be appreciated for improvements to the downtown area.

Bring your family, blankets or lawn chairs to Harp Commons for a FREE outdoor movie presentation of Toy Story 4. Attendees of all ages are encouraged to dress up as their favorite Toy Story characters. Prizes will be awarded. Light concessions, including popcorn and drinks, will be available for purchase.

Local churches and non-profit organizations will be selling concessions, including their BEST chili recipes in hopes of garnering the traveling “Chili Bowl” trophy or winning the People’s Choice Award. Bring your appetite to support these groups by purchasing food and casting your vote for the best chili with $1 votes.

Are you the best storyteller in Bedford? Do you want to hear some of the best stories in Bedford? Join officials at StoneGate Arts & Education Center (Shawna M. Girgis Building) from 7 p.m. until 8:30 p.m. Tickets are $10 per person. Children age 6 & under are free. For more information, call 812-583-6697

The 2nd Annual Downtown Derby (bed race) kicks off with registration at 11 a.m. on Saturday, Oct. 12, followed by the Parade of Beds at 12:15 p.m. The first heat will begin at 12:30 p.m. Cheer on your favorite team vying for the coveted Downtown Derby Champion Trophy.  Teams of three to five people will push a bed around the courthouse square. The race has four divisions. The entry fee is $25 per team.