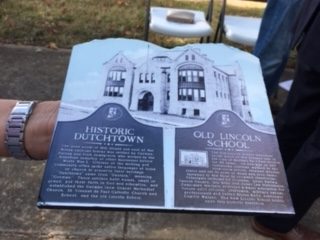 (BEDFORD) – On Wednesday morning, a historical marker was dedicated where the Old Lincoln School once stood. The marker recognizes the Old Dutchtown Neighborhood and Lincoln School.

The Bedford Fire Department Headquarters now sits at the location.

The colors were presented by the American Legion Post District 33.

The Star-Spangled Banner was sung by Becky Muncy and the Lincoln School Choir, and the Pledge of Allegiance was recited.

Bedford Fire Chief DeWayne Turpen gave the attendees information in regards to the 9/11 Memorial that was placed on the Fire Department property following the closing of the Visteon Plant in Bedford. The workers wanted the memorial in a safe location where it would be kept and maintained.

Lee Hutchinson shared background information on what it was like growing up in the “Dutchtown” community. Hutchinson would return to the community to serve as a school teacher and then as a school principal.

Charlie Walker then shared his memories of the neighborhood and playing with bottle rockets that would lead to a career as an astronaut.

“There are pleasant and fond memories of this place,” he said. “I received a wonderful education.”

Mayor Shawna Girgis noted the diverse community of Italian, Irish, and German descendants who established churches in the area, such as Grace Methodist and the St.Vincent de Paul where the community worshiped. She then presented a proclamation on this special occasion.

Mayor Girgis was assisted with the unveiling of the Historical Marker by Charlie Walker, Lee Hutchinson, and Paul Mitchell.

The 275 students and nine-room classrooms at Lincoln School provided a wonderful place to learn and allowed students to embrace the world that awaited them. Back then, times were hard and some times it was a struggle growing up. But they enjoyed their childhood, sleigh riding down the hills of H Street in the winter.

Paul Mitchell reflected on his time as a football coach and losing only two football games in nine years.

Current Lincoln fifth-grader Eli McFarland said, “It was good to be here today and learn about the old school.”