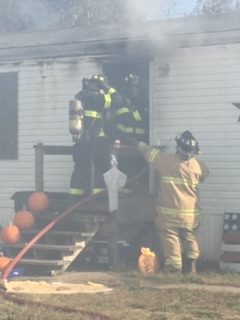 (BEDFORD) – A mobile home in the 700 block of Glendale was heavily damaged by fire Wednesday afternoon.

A neighbor dialed 911 to report the blaze.

Firefighters from Shawswick, Marion Township, Lawrence County Sheriff’s deputies and an AMR ambulance and Tabernacle of Praise Emergency Service responded around 3:54 p.m. Oolitic Fire Department firefighters were placed on standby but they were not needed.

18 firefighters and 8 engines responded to battle the blaze.

The mobile home was fully involved when firefighters arrived.

According to Shawswick Fire Chief Bob Brown, the mobile home owned by Phil Thorne was heavily damaged. The family renting the home, including three children, was not home at the time of the fire. The family had recently moved in, according to neighbors.

“We believed the fire started in the master bedroom, however, the cause of the fire is undetermined. No firefighters or civilians were hurt while battling the blaze,” Chief Brown stated.

Lawrence County Sheriff deputies kept on-lookers away from the area so they would not inhale the toxic fumes that filled the air.

The American Red Cross arrived to provide immediate assistance to the family.

Firefighters were on the scene until about 7 p.m. Wednesday.