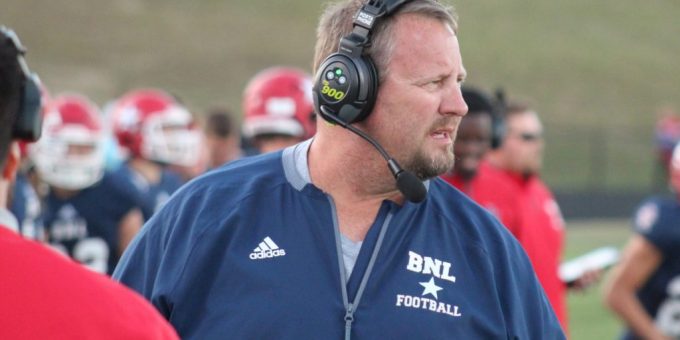 (BEDFORD) – The Wenkers Wright story is the American dream. From a hardscrabble orphanage life in poverty-stricken Haiti to high school football star, Wright has run away from destitution to make his destination the end zone.

He played soccer, barefooted, on concrete streets as a kid, now he’s cementing his status as one of Indiana’s top running backs, powering Floyd Central into the favorite position for the Class 5A sectional later this month. The Highlanders already own wins over two potential postseason opponents, and they will seek the sweep when they host Bedford North Lawrence on Friday night.

Wright was one of the lost boys, given up for adoption at age 4 when his parents could not afford to raise seven boys. His destiny changed in 2007, when he was rescued from that life sentence of struggle by an adoptive family. Introduced to football in his new home, his first touch was a 70-yard touchdown run.

He’s not stopped since. Wright ranks third in the state in rushing with 1,333 yards (averaging an amazing 10.4 yards per carry) plus 17 touchdowns, earning prime target status from a BNL defense that has been stricken with injuries and plundered for points.

The Stars (2-5, 2-2 in the HHC) are allowing 36.4 points per game, especially concerning when three games have been played with a running clock in the second half. Wright has already roasted Providence (352 yards and 4 touchdowns) and New Albany (362 yards and 5 TDs), and BNL cannot afford to allow that kind of performance.

“We have to make secure tackles and hold that kid under four yards (per attempt),” BNL coach Steve Weber said. “Right now we’re bouncing off. Last week (against Columbus East), we did about as well as you can do offensively in the first half. We just couldn’t stop them. We have to find a way. We didn’t even slow them down, and that’s what scares me.”

Last year, the Stars did slow down Wright and the Highlanders, allowing only 69 rushing yards during an impressive 35-7 sectional victory. If BNL elects to go all-out to build a Wenkers Wall, Floyd can counter with quarterback Tristan Polk (703 passing yards and 5 TDs).

“They spread the field,” Weber said. “They can throw the ball if you take the run away. With spread sets, that’s what allows them to run. You have to find a way to cover both. It’s easier said than done.”

BNL suffered a 62-21 loss to East last week, but there were offensive positives. Senior quarterback Dalton Nikirk threw three TDs, receiver Derek Hutchens made a pair of spectacular grabs, and running back Skyler Bates made his return in the backfield.

Bates was a beast last year against FC, blasting for 148 yards and a 51-yard touchdown during the sectional clash.

For BNL, after two rough weeks, this is a chance to turn the corner and start focusing on the postseason. The Stars will learn their sectional fate on Sunday evening when the IHSAA conducts the tournament draw.

“This is what we want to be ready for,” Weber said. “We still have two weeks to get where we want to be, but we want to look good and compete, starting solidifying positions.

“We’ll find out. Every day now is a new day. I would like to think they’ll come out fired up and expect to win, otherwise everything we’ve talked about is pointless. We’ll see what happens in the game.”

Last meeting: Last year, the Stars swept a pair of games from the Highlanders, winning 26-20 during the regular season meeting at BNL (Drew Shoufler caught 7 passes for 149 yards and TD) and 35-7 in the first round of the sectional at Floyd (Skyler Bates ran for 148 yards).

Game notes: Floyd needs a win to keep pace with East in the HHC race. The Olympians can clinch at least a share of the HHC title with a win at Seymour.