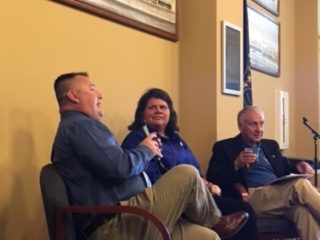 The presentation lasted almost two hours with the two men talking about how the space program developed and how Lawrence County’s own got to be a part of the exploration into space with three astronauts once residing locally.

Charlie joined McDonnell Douglas Corporation in 1977 as a test engineer on the Aft Propulsion Subsystem for the Space Shuttle orbiters. He then became the original member of space manufacturing which consisted of a team from the McDonnell Douglas Astronautics Company.

Walker graduated from Bedford High School in 1966 and attended Purdue University. He earned a Bachelor of Science degree in aeronautical engineering. He also has an honorary Doctor of Science from St. Louis College of Pharmacy.

Charlie’s first trip to space occurred on August 30, 1984. His second journey happened in 1985 as a payload specialist. He was the first non-government individual to fly into space. His total time in space includes 14 days, 20 hours and 20 minutes.

Charlie grew up on South H Street in Bedford.

“I had a great education, with wonderful teachers, even with the cold war underway,” Walker told the crowd. “I was supported by a great family, teachers, and friends like Steve Reynolds and Gary Morrison.”

Charlie reflected on the time that his dad woke him up from a sleep to go outside and look at Mars when its orbit was close to Earth. And in that brief moment, his dad asked, “Wonder if there is a boy looking down here like we are looking up there.”

The group of attendees got to ask questions about his experiences being in space. One of the questions asked was what it was like to view Earth from space. Walker spoke about being almost 140 miles from the Earth and looking down on Earth through a small window. To really see a better view, he had to go up to the top flight deck. He reflected on the blues, greens, and white colors of the earth and then seeing the beautiful diamond of stars in the dark space above.

Charlie was not accepted by NASA as an astronaut, and instead of taking ‘no’ for an answer he told the group of students from the Gateway Academy that sometimes you might have to have a plan B.

Walker says it’s time for America to get back into the Space Race and get ready to go explore Mars. He added, “The Space Program had a major impact on the technologies that we use today. “

Walker also pointed out the need to protect the planet.

“Over the years from space, you can tell the difference in what is happening to our environment. And it is our responsibility to protect it. It is a thin piece, that is fragile, and once we lose it, it’s gone. The skin of an apple is 10 times thicker than the life support of our earth,” he added.

In space, they ate meals from pouches that were ready to eat. The group asked what food he missed most while in space.

“Most of the astronauts have a craving for pizza when they return home from a mission,” he added.

He also noted that space ice cream did not taste good and was not their favorite while in space.

During his first trip into space, Walker reflected about being on the launch pad with three of the five thrusters fired up and being two seconds from lift-off before the mission was scrubbed for the day.

Walker was on three space shuttle missions which included Discovery.

Steve Grissom is a 1992 graduate of Mitchell High School. Upon graduation, he enlisted in the U.S. Air Force in support of Operation Desert Storm, and Southern Watch. Upon his honorable discharge from the military, he returned home to Mitchell where he found his newly rekindled interest in his famed cousin “Gus” Grissom.

“I really did not have an interest in Gus until after I served in the military and met up with many of the people from the space program at Vandenberg Air Force Base in California. Really my interest did not start until about 1999,” Grissom commented.

Grissom has spent hours talking to the men and women of NASA about his cousin Gus.

“One thing that I have realized [is that] these men truly are humble people. And it is amazing to get some of these astronauts to come to the little town of 5,000 people. When I asked them why they decided to come, they stated it was respect for Gus.”

One of Gus’s quotes was ‘Do Good Work’ and his work still lives on today.

Steve Grissom is currently the President of Virgil I Grissom Memorial Inc. whose mission is to educate the community on who Gus Grissom was, what he accomplished, and the legacy he left.

Since 2017, Steve continues to honor Gus Grissom and the American Space Program by spearheading the Galactic Gathering which brings some of the biggest heroes of the space age to Lawrence County.

Currently, Steve’s next project is to develop the Grissom Center of Space Education which will house a world-class aerospace museum and the legacy Indiana astronauts have left.

Facts about the Apollo Program:

This weekend the Galactic Gathering will feature Hollywood Actor Joel Johnstone and Moon Walker Harrison Schmitt. It will also include a memorial to Betty Grissom.

Johnstone will be at the Gus Grissom Boyhood Home around 10:30 a.m. Saturday morning for some photo opportunities standing on the front porch of Gus’s childhood home.

Harrison Schmitt is an American geologist, retired NASA astronaut, University Professor, former U.S. Senator from New Mexico, and as a crew member of Apollo 17, the most recent living person to have walked on the moon.

10:30 a.m. – 12:00 noon – VIP Tours Through The Gus Grissom Home. Tickets are required and available to purchase online for $20. Amenities include a photo with actor, Joel Johnstone, appetizers, and desserts.

1:30 p.m. – 3:00 p.m. – Free Tours through the Grissom Boyhood Home. Tickets are not required. Donations will be accepted and appreciated. Tours will be open-house style and will not include the amenities offered in the VIP Tour.

7:00 p.m. Symposium held at the Mitchell Opera House on North Seventh Street for a special presentation from moonwalker and geologist, Harrison Schmitt with opening speaker Joel Johnstone. Tickets are $30 per person and are required and available for purchase.  There will not be autograph opportunities at any time during the event.  For more information visit https://www.eventbrite.com/e/galactic-gathering-2019-tickets-56259969082