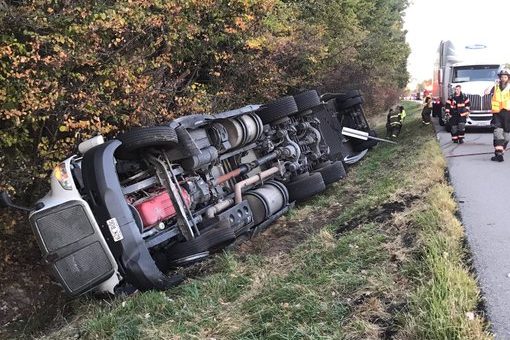 (CROTHERSVILLE) – Two people were arrested after a semi overturned on Interstate 65 in Jackson County.

According to an Indiana State Police report, 40-year-old Torris Robinson, of Anniston, Alabama, was traveling south on I-65 in Jackson County when the semi he was driving left the road and turned over, coming to a stop on its side. Neither Robinson or his passenger, 38-year-old Mary Thompson, also of Anniston, were injured.

An ISP investigation began after Robinson showed signed of being intoxicated. He was transported to a local hospital for a blood draw. While at the hospital he spit on an employee.

Robinson was arrested on charges of operating a vehicle while intoxicated, OWI endangerment and battery by bodily waste.

His passenger Thompson also showed signs of being intoxicated. She became belligerent and was resisting arrest.

Both were transported to the Jackson County Jail.

Interstate 65 was restricted to one lane through the area for nearly five hours while troopers investigated the crash and crews removed a load of tires in the trailer and then uprighted the semi and trailer.