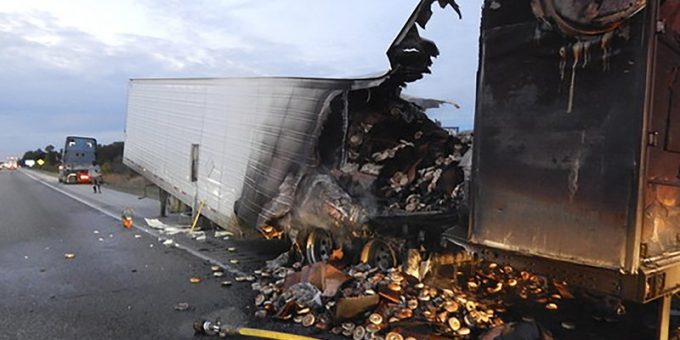 (RENSSELAER) — A load of frozen bagels ended up toasted and strewn along a northwestern Indiana highway after a semi-trailer’s rear axle caught fire.

State police say an off-duty trooper noticed smoke pouring from the rear of a box trailer being hauled Sunday evening by a semi along northbound Interstate 65.

The southbound trooper turned around, but by the time he stopped the truck south of I-65′s Rensselaer exit, its trailer’s brakes were burning as the flames spread into its 38,000-pound load of frozen bagels.

Police say the driver of the truck owned by Balkan Logistics Group out of Countryside, Illinois, had failed to release the trailer’s rear brakes.

He disconnected his rig from the trailer before its rear tires exploded from the fire’s heat. Local fire crews then doused the flames.