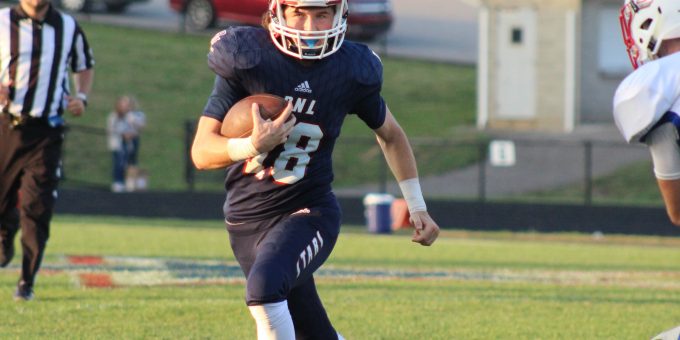 (BEDFORD) – The streak defies logic and explanation, the dynasty defies challengers. Can anyone end Columbus East’s reign in the Hoosier Hills Conference?

The numbers are staggering, now approaching mythical status: 15 consecutive league championships, 87 straight regular-season wins against conference opponents, 98 in a row if postseason clashes are included. Only two teams have stayed within single digits during that remarkable span.

The Olympians (4-2 overall, 3-0 in the HHC) are almost the Harlem Globetrotters of football, and the rest of the conference has become the Washington Generals. The question seems to now be not “when” East will finally suffer slippage, but “if” the Olympians will ever stumble.

Bedford North Lawrence (2-4, 2-1) is the next obstacle in East’s pulverized path. And the Stars, already ravaged by injuries, are not in the best position to withstand and repel the powerful force.

The Stars, the last league team to conquer East (way back in 2006), will host the Olympians on Friday night, celebrating Senior Night for the 20 upperclassmen on the roster. Unfortunately, it seems not many of them are left standing, at least not without crutches or bandages.

For BNL, the list of who isn’t playing now threatens to smother the list of who is, in terms of experience and familiarity. Two freshmen will likely start. The battered backfield will feature sophomores. The new cliche of “next man up” will be severely tested.

“It’s going to be tough,” BNL coach Steve Weber said. “We have a lot of young guys stepping in, and it’s hard when you’re playing the caliber of teams we’ve seen the last couple of weeks. But they’re getting quality reps as youngsters, and it’s going to help them in the future.”

Here’s the walking wounded update: Skyler Bates, who has missed three games, will see some limited action. James Underwood, Tabin Stillions and Justice Woods (out for the year with a torn ACL in his left knee) will not. Those guys have done the bulk of the running in the triple-option offense.

In their place: hard-nosed freshman Dylan Nikirk, sophomore Grant Todd, and sophomore Dawson Ferry. Another freshman (Jett Jones) will start at center. Senior quarterback Dalton Nikirk will be the only one with a driver’s license back there.

Against some opponents, perhaps that would work. Against East, it’s a difficult assignment. “We’re nowhere near ready to block against a team like that,” Weber said. “It’s the physical part.”

East will certainly be physical, with junior running back Mark McDonald (805 yards and 10 touchdowns) dishing out a lot of punishment. He slashed the Stars for 276 yards and four TDs in last year’s regular-season battle, then added 131 yards in the sectional final. If East chooses the air, quarterback Cole Gilley has thrown for 1,306 yards and 15 TDs.

“They’re good,” Weber said. “It’s the same thing we always see – big, strong and talented. They throw the ball well and the defense is all over the place.”

BNL will have to rely, if possible, on playing keep-away with ball-control football, on shortening the game by winning time of possession (or else the game will be shortened if East runs rampant). It means senior middle linebacker Jacob Hobbs will have to make a multitude of tackles, it means senior lineman Cale Bunch and the reshifted offensive line must create holes, it means senior quarterback Dalton Nikirk has to have time to find receivers.

“Dalton is playing hard and keeping a good attitude,” Weber said. “It’s hard when you lose our center (Reagan Bowman), your guard, your running backs. A lot of stuff we could have taken off his plate, but he’s had even more dumped on there. He’s going a good job of handling it all.”

East lost to city rival North (42-31) and Ohio power Pickerington Central (20-14). The Olympians have outscored Jeffersonville, New Albany and Floyd Central by a combined count of 137-21 the last three weeks.

Last meeting: Last year, East swept a pair of games with the Stars, prevailing 58-48 in a regular-season shootout and 51-14 in the sectional final.

Game notes: Only two HHC teams have come within single digits of East during its current streak (BNL lost 35-31 in 2012). East coach Bob Gaddis ranks fourth on the current coaching wins list with 319.