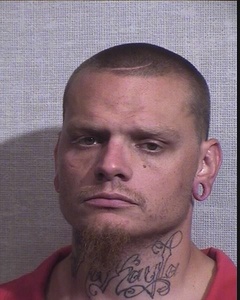 (SEYMOUR) – A Seymour man was arrested after he fled from police on a stolen motorcycle after a traffic stop on Tuesday.

The incident began at 5:47 a.m. when Jackson County deputy Jordan Hawn stopped Waggoner who was driving a motorcycle at 5:47 a.m. in the 1500 block of Morningside Drive in Seymour.

According to a press release from the Jackson County Sheriff’s Department, Hawn discovered that the motorcycle was reported stolen in Bartholomew County on Sunday.

After being stopped, Waggoner fled on foot past several homes on Morningside Drive.

That led officers to a residence at the corner of Lakeview and Manor drivers, where officers found Waggoner in the backyard.

Waggoner was arrested without incident. He is being held in the Jackson County Jail without bond.