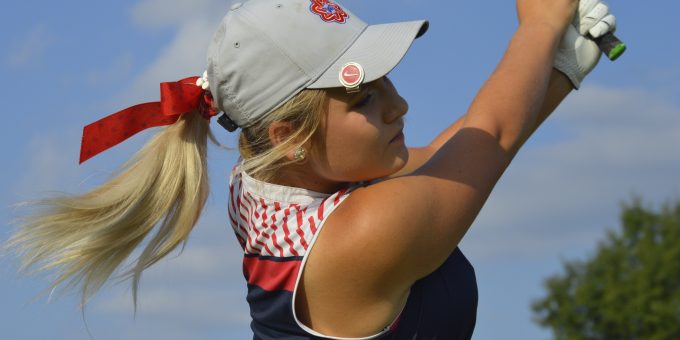 (BEDFORD) – One day, during those awkward sixth-grade time periods when a kid doesn’t quite know their niche, Addyson Bailey picked up a golf club and thought “I love to do this. This is what I want to do.”

Five years later, she has found her place. With her clubs in hand, Bailey will make another appearance in the IHSAA state golf finals. Bedford North Lawrence’s stylish junior has proven that’s where she belongs.

Bailey will compete in the state championship for the third consecutive year, the difference being this time she’s alone, one of the individual qualifiers following her round of 76 in the regional at Country Oaks last week. She’d rather have company, as she did as as member of qualifying BNL teams the previous two seasons.

But when Friday’s 10:36 a.m. tee time bell tolls at Prairie View Golf Club, her supporting cast will be outside the ropes. Two rounds, on a testy, unforgiving course, competing against the state’s elite. Go get em, girl.

“It’s very exciting and I’m very blessed to do this again,” Bailey said, still sorting through the emotions of individual success in a team sport, “but it’s very sad I’m not going as part of a team this year. It’s just going to be me. Hopefully next year we can all go as a team again.”

Bailey will face a tough track with plenty of experience, although not all of it positive. She couldn’t crack 100, quite understandably, as a freshman. She shot two rounds in the 90s in last year’s finals. This year she carded an 87 in the State Preview tournament on the same course. So there’s a trend. And she’s shooting to break 80.

If she does, she should stick out her tongue at the place in a “take that” gesture. Her experience should be an advantage.

“She’s been through it enough,” BNL coach Aaron Sanders said. “She’s been in the state finals twice already, she has a lot of playing time and a lot of rounds under her belt. You ride that and trust our swing, pick your targets and stay focused.

“She’s more consistent and that comes with maturity. Her golf swing is working the way it’s supposed to. So we kind of knew she would get to this point.”

“I have experience, and I think that’s a tremendous help,” Bailey said. “I should be calm and collected to go out and do my best. It’s getting in the right state of mind, being calm and collected, knowing I’m going to do whatever to make it by.”

Bailey comes from a golf family, although they gave her room to make her choice. The game has become her passion, her friend, her classroom.

“I love going out and meeting other people, getting to know other teams,” Bailey said, pointing to the bonds formed with Seymour’s team (Bridget Marshall will also compete in the finals) as an example. “It’s being courteous to people, it’s taught me how to communicate with people and have a good attitude. Some days you start off good, some days you start bad. For me the most important shot is the next.

“My parents have had the most impact in my life, pushing me to do my best, making sure I have the things to do my best.”

What she has now is a solid long game and the ability to shrug off mistakes. That’s playing what she describes as “Addy Bailey golf.”

Bailey and the field will compete in the final round on Saturday. There is no mid-point cut in the 36-hole event.