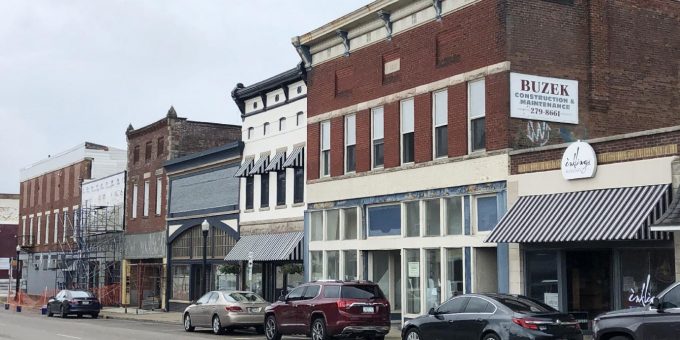 (BEDFORD) – Built as a combination livery stable and social hall in 1898, the two-story Italianate commercial building at 1018 16th Street in downtown Bedford dates from a period of dramatic growth in the Lawrence County community.

The city’s population nearly doubled between 1890 and 1900, fueled by the rapidly expanding limestone industry.

The building – last occupied by Goff Refrigeration Company – served a number of uses, but in recent years neglect took an increasing toll.

In August 2016, the city condemned the Goff Building, citing a combination of factors including an unsafe electrical system, a leaking roof, and a failing rear masonry wall.

“The city realized that it would rather direct funds toward saving this significant historic property instead of demolishing it, which would create a significant gap in our downtown streetscape,” says Bedford Mayor Shawna Girgis.

The property’s owners agreed to donate the building to the city, which will satisfy tax liens before conveying the property to Indiana Landmarks along with $235,000 for exterior rehab.

“Preserving our downtown is important, and we value an opportunity to partner with Indiana Landmarks,” says Mayor Girgis.