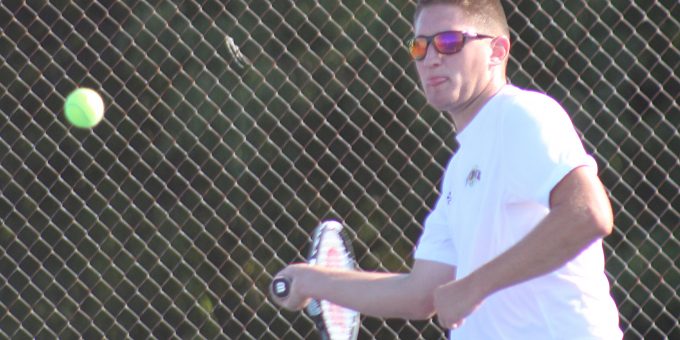 BEDFORD – Senior Day doubled as Preview Day as Bedford North Lawrence finished the regular season with a victory over Edgewood.

The Stars honored their three seniors, sending Cade Provo, Wyatt Scherschel and Dennis Moore off with a 5-0 sweep of the Mustangs on Monday afternoon. BNL also learned its sectional fate and will face a rematch with Edgewood in the opening round on Wednesday.

BNL (12-10) duplicated an earlier victory over the Mustangs just 16 days ago.

Provo pounced on Lincoln Hammond 6-3, 6-1 at No.1 singles, Scherschel teamed with Cameron Gratzer for a 6-1, 6-1 conquest of Nicholas McBride and Zeke Weisner at No.1 doubles, and Moore made the most of his first start while combining with Konley Woodward for a 6-1, 6-1 victory over Hayden Wilson and Chris Bitner at No.2 doubles.

Steven Graham, switched to singles for only the second time this season, conquered Gavin Hinson 6-0, 6-2 at No.3, and Adam Tlustek topped Josiah Hinson 6-1, 6-4 at No.2.

The Stars will seek their third win over the Mustangs in the sectional opener at Bloomington North.