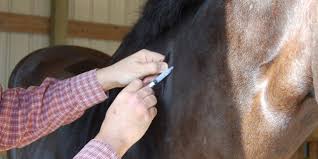 (UNDATED) – State officials say 11 horses in northern Indiana are infected with Eastern Equine Encephalitis as the mosquito-borne virus continues to spread among humans and animals in several states.

The virus was confirmed in nine horses in Elkhart County and two horses in LaGrange County.

The Indiana State Board of Animal Health says 10 of those horses have either died or had to be euthanized because of the impacts the disease has on their nervous system.

“This is a neurological disease and the clinical signs can become severe enough that the horse will struggle to get up,” says Denise Derrer, PIO with Indiana’s BOAH.

State officials recommend that equine owners talk to their veterinarians about an effective vaccination protocol to protect horses from EEE and another mosquito-borne disease. Vaccinations typically require two initial doses for horses, mules, and donkeys that have no prior vaccination history. Officials recommend a booster shot every six months.

Officials say so far the virus has not been detected in animals or mosquitoes in Southern Indiana.

EEE is one of the most dangerous mosquito-borne diseases in the United States and is fatal to approximately 30 percent of people who contract it, according to the Centers for Disease Control and Prevention (CDC). Those who survive are more likely to have severe ongoing neurological problems.

On average, around seven cases of EEE are reported in the U.S. each year, according to the CDC, and most of those cases occur in the eastern or Gulf Coast states. The positive tests in northern Indiana come in the wake of at least seven human deaths — including three in Michigan — from the disease so far this year, and reports that at least 27 people have tested positive for the disease in six states.

The incubation period for EEEV disease ranges from four to 10 days from the date a person is bitten by an infected mosquito, according to the CDC. An EEEV infection can result in two types of illness, either systemic or encephalitis, depending on the person’s age and a number of other factors.

In humans, the virus invades the central nervous system and causes inflammation in the brain. About 30% of people who contract EEE die and many of those who survive have ongoing neurological problems, according to the CDC.

Symptoms of EEE are similar to that of the flu and include: