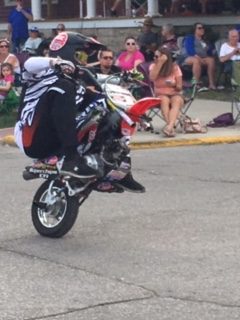 (MITCHELL) – The 73rd Annual Persimmon Festival had more than 100 units participate in the parade Saturday in Mitchell.

“We try to offer a variety of things, to be enjoyed by parade attendees who have different interests,” stated Vicky Schlegel. “ We try to bring in new acts. And this year, a few did not show up. But this year’s festival was a success.”

“We enjoyed the positive comments and will work to always do better next year,” Schlegel added.

During this year’s parade, an accident occurred between a police motorcycle and Shriner car which stopped the parade about twenty minutes into the parade. The delay lasted more than forty minutes, before resuming.

At least one person was transported to a local hospital and parade officials were not able to provide any details of the accident.

This year’s parade Grand Marshal was Dan Bortner, who works for the Indiana Department of Natural Resources in Indianapolis and helped with improvements of the Spring Mill State Park.

The winners of this year’s Parade include: