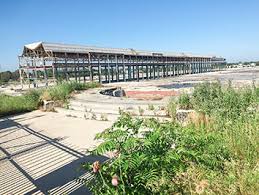 (INDIANAPOLIS) — A developer has scrapped plans to turn the site of a former General Motors Co. stamping plant in Indianapolis into a $1.4 billion mixed-used development.

But the company announced Friday that it’s selling the site along the White River to focus on its e-commerce and industrial real estate business.

The site once housed the GM Stamping Plant, where the automaker at one time employed about 5,600 workers. The Indianapolis factory closed in 2011 and was largely demolished in 2013.