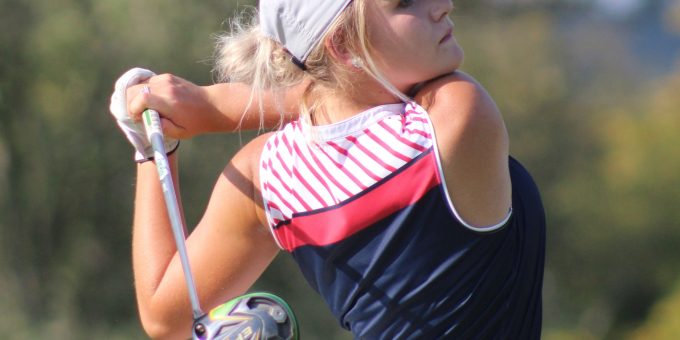 Stars finish 5th as a team

(MONTGOMERY) – Addyson Bailey, bubbling with confidence in her game, kept her cool when others around her faltered and earned an invitation to the final stage of the IHSAA state tournament series.

Bailey carded a 4-over 76 during the regional round at Country Oaks and qualified for the state finals on Saturday afternoon, snagging one of the coveted individual spots at Prairie View Golf Club.

She will go alone. Bedford North Lawrence, shooting for its third consecutive trip to the finals as a team, come up short in that quest, stumbling on the back nine after making the turn in prime position. But Bailey, one of the BNL juniors with pressure experience, kept her scorecard clean and herself upright to make the cut.

BNL finished fifth in the 18-team field with a score of 340. The top three teams, plus the top five individuals who are not members of qualifying teams, advanced to the state championship on Oct. 4-5.

Top-ranked Evansville North, as expected, won its sixth straight regional title with a brilliant score of 284 and will defend its state crown. No.16 Evansville Memorial was second with 310, and Gibson Southern claimed the third spot with 327.

The Stars were in prime position to make it, locked in third place after a superb front-nine score of 159, but played the final six holes in brutal and dooming fashion as their chance slipped away.

Not so with Bailey, who carded an even-par 36 on the front (with two quick birdies fueling her getaway) and sidestepped her lone major miscue (a triple-bogey on the 15th) to reach her goal.

“My attitude definitely changed today,” Bailey said. “I felt prepared going into it, I had a level of confidence I’ve never had before. The key was keeping calm and playing Addy Bailey golf.”

Bailey’s early birdies came on holes 3-4, and she added another on the par-5 sixth. Her final birdie came on the 12th, but she dropped five strokes on holes 15-17.

“She had it going pretty early, just one little hiccup,” BNL coach Aaron Sanders said. “But she held it together. Awfully proud of her. She’s been playing really well the last few weeks, swinging the club good. She played with confidence.”

Now she will test herself on the grand stage, although it will be a bittersweet moment.

“It will be different.” Bailey said. “It’s going to feel weird not having teammates with me and having the experience with them. I can’t even describe it, there are so many mixed emotions right now.”

For the other Stars, that emotion is disappointment.

“Maybe nerves got to some of them,” Sanders said. “It just got away, And it goes quick. It was real unfortunate. We had it going for a while and we were scaring some people. But you have to hold it together. Last year we did. This year we didn’t.”

Ashley Chase fired an 81, Olivia Sanders carded an 82, and Kennedy Blair capped the BNL scoring with 101.

“Luckily we don’t have any seniors on this team,” Sanders said. “Maybe we will take something from this and learn from it.”

Memorial’s Mallory Russell was the regional medalist with a sensational 6-under 66. Faith Johnson paced the Huskies to the title with a 67. North had four of the five best scores in the field.