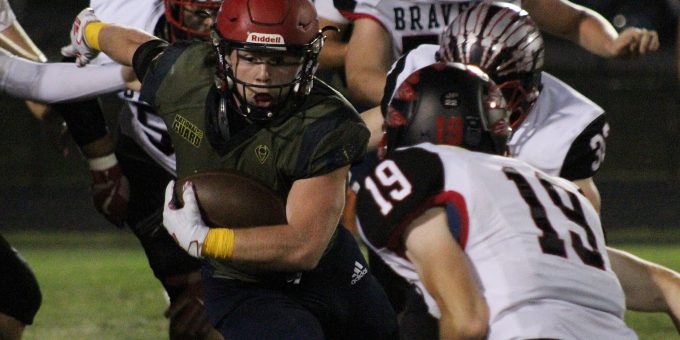 (BEDFORD) – Bedford North Lawrence’s beleaguered defense could have used that intimidating cannon, courtesy of the National Guard, parked in the south end zone. That awesome weapon spurt out blanks, puffs of harmless smoke, when the Stars scored.

Haire blasted for 168 yards and two touchdowns, powering the No.9 Braves to a 49-21 victory over BNL on Friday night. South quarterback Caleb Stultz, in his best Joe Montana impression, completed 12 of 15 passes, including his first 10 attempts and two scores, as BNL could not contain the Braves when they pulled the trigger on a dynamic offense.

Cutting Haire was tough, when 245 pounds of muscle and mean rumbled downhill. Too many secondary tacklers paid a price for stepping in his path. Too many tackles were missed when speedy Jacob Rutledge ripped into open space for big-play scores, adding another 100-plus rusher to South’s attack.

BNL, already hobbled, lost its spirit when senior linebacker Justice Woods went down midway through the first quarter, clutching his left knee and yelling in agony. He finished on the sideline wearing ice and crutches, a symbol of what the Braves did to BNL’s defense.

Give the Stars (2-4) credit for spunk, for big-play shock when they struck for two touchdowns in a 103-second span early in the second quarter and pulled even at 14-14. BNL coach Steve Weber had a quick fantasy:

“I thought, ‘Here we go,’” he said. “But it’s hard. We had no answers when we got down. And we have guys that shouldn’t be on that field playing multiple positions. That’s tough against a good team.”

The Braves (5-1) were brutal in force, scoring on 7 of their first 9 possessions. It started with a bang – Haire from 5 yards on Drive 1, James Mallory (the grandson of the former Indiana University coach) with an 18-yard snag from Stultz to end Drive 2.

BNL wasn’t dead yet. Dalton Nikirk found Tabin Stillions alone in the secondary for a 61-yard touchdown strike to start the second quarter. After South’s only punt that mattered, Nikirk raced 50 yards for the second touchdown to create the deadlock.

“They battled, and I’m proud of them,” Weber said. “Most teams would quit. I couldn’t ask for any more effort. I could ask for more execution, but effort and heart were there.”

That wasn’t enough. South marched again, with Haire hammering in from 15 yards for the go-ahead score. After BNL fumbled on the next series, Stultz connected with Rutledge from 12 yards for a two-score advantage at the half.

The gap widened. Rutledge raced 36 yards for a 35-14 lead. After the Braves forced a fourth-down fumble to snuff the next BNL drive, Rutledge roared 48 yards for what would be the clinching score.

When Josh Cottee capped the next South series with an 18-yard scamper, the new 35-point “mercy rule” was triggered, although BNL came back with Dalton Nikirk’s 3-yard toss to younger brother Dylan (set up by a 64-yard bomb to Derek Hutchens) for the last touchdown.

Haire, all thighs and pads when on the move, powered South to 344 rushing yards.

“Our bread and butter is running the football,” South coach Tim Herrin said. “Tonight he had that extra gear. When he starts going, he tough to bring down.”

“Big kid,” Weber said. “When you sit back and let him come after you, he’s a big kid. We struggled. They’re weren’t afraid of him, but they second-guessed themselves.”

Take away BNL’s two zap touchdowns, and the Stars were held in check, managing only 7 first downs. Nikirk was 9 of 14 for 169 yards and the two TDs, but minus his 50-yard bolt, the Stars totaled only 55 rushing yards.

“Any time you see an option team, it’s fundamental football,” Herrin said. “Blowing assignment is going to happen. But I’m proud of the way we responded when they tied it.”

BNL, now resembling a triage unit in an emergency room, will have to regroup to face Hoosier Hills Conference power Columbus East next week. The Olympians (4-2) thumped Floyd Central 41-14 on Friday night.