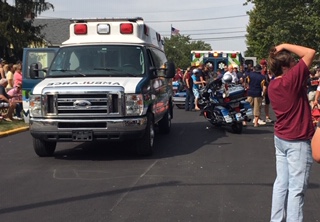 The accident happened on Eighth Street between Brook and Oak streets at approximately 2:20 p.m., almost twenty minutes into the parade.

At least one person was transported to a local hospital for treatment. Vicky Schlegel, Parade Chairperson of this year’s parade, was not able to provide details of the accident.

“We try to err on the side of safety. We try to space the parade units out to prevent accidents. Especially moving units to prevent this type of thing happening,” stated Schlegel.

The parade was delayed approximately forty minutes until the accident scene was cleared.