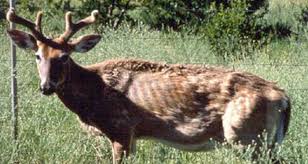 (UNDATED) – The Indiana Department of Natural Resources is asking hunters and the public to report sick or dead deer.

According to a Department of Natual Resources Biologist Jim Schreck, Southern Indiana counties are seeing an unusually high number of EHD, or Epizootic Hemorrhagic Disease.

“This is one of the worst years we’ve had in a long time,” Schreck added.

EHD is a viral disease that can infect deer, particularly white-tailed deer. The disease is transmitted through gnats, which thrive in areas with pools of water.

The clinical signs or symptoms show up about seven days after a deer has been infected with the virus.

These signs can include not eating, weakness, loss of fear of humans, circling, and other neurological signs.

Deer that have died from EHD may have a swollen tongue, eyelids, neck, or head. The disease is often fatal, but some deer will survive and develop immunity.

Symptoms include lack of eating, loss of appetite, weakness, no fear of humans, moving in circular patterns.

If you notice any of these symptoms or signs, report it here.

Indiana DNR’s primary method for monitoring EHD outbreaks is through reports of individuals who suspect a sick or dead deer. These reports are collected through DNR’s sick and dead deer reporting form.

When possible, fresh dead deer may be sampled for testing by trained staff.

Once a county is confirmed to have EHD, Indiana DNR uses the online reporting to monitor the spread and extent of the disease.