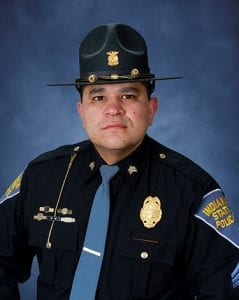 (MERRILLVILLE) — An Indiana State Police sergeant is being credited with saving a motorist’s life after he spotted her blocking traffic and quickly realized she was choking.

State police say Sgt. Dan Avitia was stopped at a traffic light Tuesday in Merrillville when he heard vehicle horns honking and saw an SUV that wasn’t moving at a green light. Other drivers were cursing and gesturing at the driver, but Avitia saw that she was holding her hands at her neck.

Avitia ran to the driver and struck her back, clearing her airway. Police say the 41-year-old Crown Point woman had been eating tacos while driving and choked.

Police say the woman was checked out at the scene in northwestern Indiana by paramedics and eventually was able to drive away on her own.