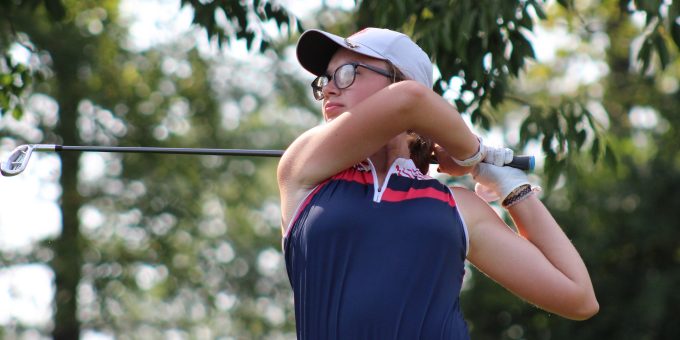 (BEDFORD) – If experience matters, if past success is a reliable predictor of future results, Bedford North Lawrence is in prime position to reach its ultimate goal.

The Stars, with three veterans at the top of the lineup, will seek their third consecutive trip to the IHSAA state finals when they tee off in the regional at Country Oaks on Saturday.

Does experience matter? According to Michelle Obama, it does. “It’s important for you to understand that your experience facing and overcoming adversity is actually one of your biggest advantages.” If true, BNL is a step closer than most in the 18-team field.

Unfortunately, golf demands daily proof, rather than giving preference to reputation or yesterday’s highlights. BNL should be among the contenders for the top three spots that will advance to the state finals at Prairie View on Oct. 4-5.

“We will be one of the more experienced teams there,” BNL coach Aaron Sanders said. “We’re going to use that to our advantage. Maybe that will help us out.

“They want it, they want to get back there. They feel like they have some golf to prove. Getting back there would be a big deal.”

BNL has made eight previous trips to the finals, the last two after a 32-year absence. The Stars are seeking their first threepeat run since 1976-78. So that would definitely be a big deal.

The key question, unanswerable until all the scores are submitted: what will it take to make it?

Here are the known facts. No.1 Evansville North, the defending state champion and five-team defending regional champion, is the favorite. No kidding. The Huskies shot a state-record 281 while winning their eighth straight sectional title last week. No.16 Evansville Memorial fired 309 in that same sectional.

The third spot, if the first two are already locked away, could be quite a battle, with No.18 Gibson Southern (which shot 331 while winning the sectional at Jasper), No.19 Floyd Central (319 while winning at Corydon) and BNL (330 during its victory in the Hoosier Hills Conference) among the contenders.

The Stars didn’t get to that level last week while winning their seventh straight sectional at Otis Park, posting a pedestrian 356 that, if duplicated, would likely get them left home this time.

“I feel like we will have some good scores,” BNL’s Addyson Bailey said. “We’ll be pretty pumped to bring our A game. You have to have that mindset in that big of a tourney. Just worry about your scores and hope everyone else pulls it together.”

BNL finished second with 332 in 2017, then settled for third last year (in a constant rain) with 342. Bailey, Olivia Sanders and Ashley Chase were all part of the latter, and they will be tasked with leading the Stars to the final stage of the state tournament series.

“Who knows what it will take,” Sanders said. “We’ll get after it. We try not to worry about what other people are doing, but I would think we have to bring our best game. If we play like we did in the conference, that would be enough. If we can get one of the others (Samantha Biel and Kennedy Blair) to turn in something respectable, we have a chance.”

The top five individuals who are not members of qualifying teams will also advance to the state championship.