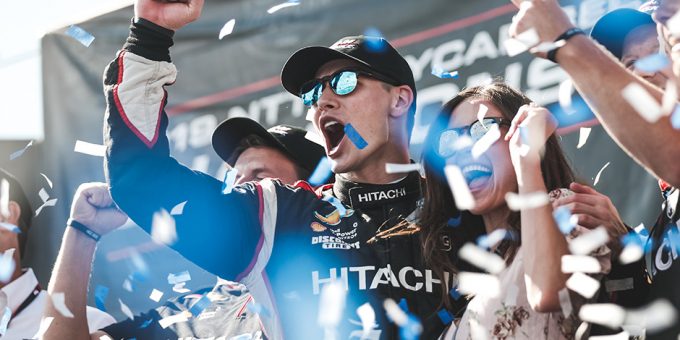 “They called a great race,” Newgarden said of his crew. “We won the Indy 500 with Simon (Pagenaud), which was fantastic, and to win the championship I think is as much as you can ask for in a year. We had such a great group. I can finally sleep at night.”

In spite of coming up short in the championship, Pagenaud said he is pleased with how the 2019 season went for him.

“I got the 500, you can’t be disappointed in that,” he said. “I think this has been my most complete season.”

Alexander Rossi and his team took a different tire strategy in Sunday’s race in an attempt to try and get him in a position to over take Newgarden for the championship as he sat in second place heading into the race.

Rossi decided to start on the sticker red tires, which were much slower than the black tires in the long run.

We took a gamble,” Rossi said. “We were pretty committed to trying to do something different, and if we ended up third swinging, it was better than just being complacent and coming home second.”

Rookie driver Colton Herta, who started on the pole, won Sunday’s race beating out Will Power and Scott Dixon in the closing laps to get his second win of the season.

“It was a perfect race,” Herta said. “Whenever you win an IndyCar race, it has to be a perfect race. You can’t really make mistakes and get away with it. We had the pace on them, and we were definitely the best today, so we definitely deserved to win.”

It was Herta’s final race with Harding-Steinbrenner Racing as well as he will be transitioning to a fifth seat with Andretti Autosport next season with some backing from George Steinbrenner IV.

Drivers will now take the winter off ahead of the first race of the 2020 campaign in March at St. Petersburg.