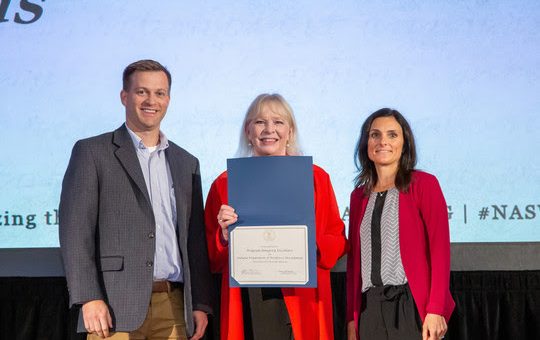 (INDIANAPOLIS) – The State of Indiana has won a top honor from the U.S. Department of Labor (USDOL) for excellence in service demonstrated by its Unemployment Insurance (UI) program. USDOL presented Indiana with a UI State Performance Program Integrity Excellence Award for being a leader in the large state category, which includes states where employment exceeds 2 million. Officials from the Indiana Department of Workforce Development (DWD), which administers the UI program, accepted the honor at the recently concluded National Association of State Workforce Agencies’ (NASWA) Workforce Summit and UI Directors’ Conference in Boston.

This is the first year USDOL has recognized states with an Excellence Award for Program Integrity. Indiana received the top honor in the large state category for jumping from 52nd in 2011, including Washington, D.C., and Puerto Rico, to 2nd in key areas of unemployment insurance efficiency.

“We at DWD are proud to be receiving such a prestigious award from the Department of Labor,” DWD Commissioner Fred Payne said. “Our unemployment insurance team has been working hard to provide Hoosiers with the high-quality service they expect, and to be recognized nationally for that is quite an honor.”

“The Department of Labor’s recognition of Indiana as the top performer in the large state category really helps to validate the improvements we’ve made to the UI system,” said Gina Ashley, DWD’s Chief Unemployment Insurance and Workforce Solutions Officer. “It’s rewarding to know that our investments in preventing, detecting and recovering fraud are working and are being recognized.”