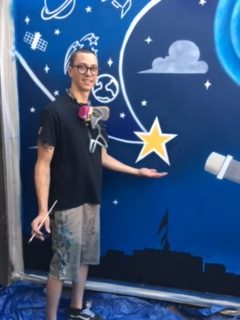 Nathan Watson, Operations Director of Bedford Public Library, has worked on the theme for the project.

Schuring states the project has incorporated Lawrence County’s rich history of astronauts as well as serve as an interaction for those on social media.

The star incorporates the idea of the people we look up to and inspired us to be what we want to be throughout our lives.

Looking through the telescope, and looking toward those stars let us be able to see those individuals through the lens – seeing that there is no limit on who or what we can be.

Schuring is originally from Illinois and lived ten-years in Lafeyette. He has lived the lasts five years in Bedford. He runs a business called Metabete Creative and is on Instagram and Facebook.

He would like to see local officials have a street arts festival, to bring talented artists to the county. He participated in the arts festival in Lafayette for the last three years and attended one in Rensselaer, Indiana this year.

Some of his work can be seen around town – the chicken painted on a mural near the Harp Commons. He has also worked on many beautification and street landscape projects including a mural at the Chocolate Moose in Bloomington.