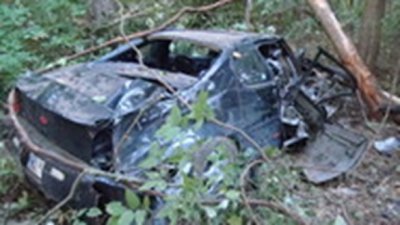 The preliminary crash investigation revealed that Brady Riley, 19, of Burnettsville was driving a 2000 Chevrolet Monte Carlo southbound on County Road 825 West near County Road 250 North. For an unknown reason, the Chevrolet traveled off the west side of the road, into a wooded area, and hit multiple trees.

Riley had to be extricated from the vehicle by firefighters. He was flown via medical helicopter to a Fort Wayne hospital with possible broken bones and internal injuries.

James Hornback, 21, of Royal Center, was a passenger in the Chevrolet. He was ejected from the vehicle and his left leg was severed below the knee. Prior to the arrival of medics,  ISP Trooper Chris Miller and the victim’s friends applied a tourniquet to the leg to stop blood loss from the injury. This possibly saved Hornback’s life as  Hornback was flown via medical helicopter to a Ft Wayne hospital.

Neither Riley nor Hornback were wearing a seat belt.