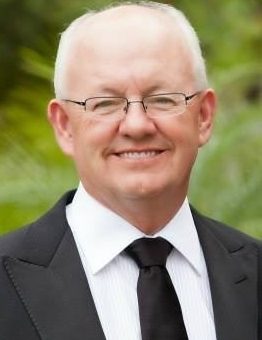 Randy Joe Hawkins, 63, of Bedford, passed away peacefully on September 20, 2019, at his home surrounded by family and caregivers.

Randy was born September 1, 1956, to Zelbert and Gloria (Reuter) Hawkins of Bedford. He married Emily McIntyre on December 27, 1978, and she preceded him in death on July 29, 2017. He was a graduate of Bedford North Lawrence High School in 1975. He was co-owner of Hawkins Bailey Warehouse. Randy was a member of Dive Christian Church, Elks Club, and Ideal Club. He served on the boards of Bedford Federal Savings Bank, IU Health Bedford Hospital, and Christ Reaching Asia Mission World Wide.

Randy was preceded in death by his father, Zelbert Hawkins.

Funeral services will be conducted at 2 p.m. on Friday, September 27th at Dive Christian Church with Bro. Jimmy Johnson officiating. Burial will follow at Dive Cemetery.

Visitation will be from 2 p.m. until 8 p.m. on Thursday, September 26th at the Day & Carter Mortuary and from Noon until the hour of service on Friday at the Dive Christian Church.

Family and friends may express condolences at http://www.daycarter.com