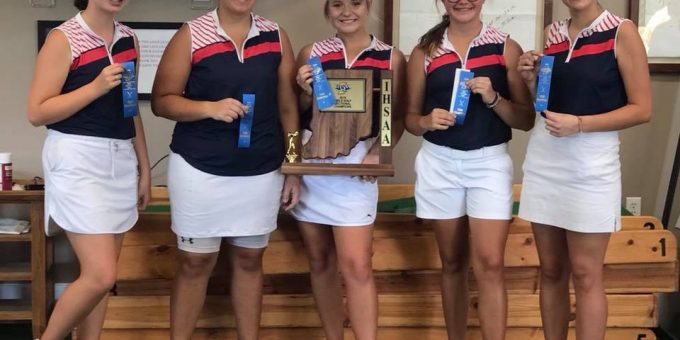 (BEDFORD) – The voice in her head kept Addyson Bailey locked on target.

The Stars won their seventh straight sectional title (halfway to the state record, by the way, set by Twin Lakes in 2011) and 14th overall while cruising around their home course with a team score of 356. Seymour was the distant runner-up in the six-team field with 403.

The top three teams, plus the top three individuals who were not members of qualifying teams, advanced to the regional at Country Oaks on Sept. 28.

“It was all in my head today,” Bailey said. “I just kept telling myself to be calm, relaxed, and play my game.

“I had ups and downs, but I pulled most of it together. I just tried to tell myself ‘I can do this.’ I was very blessed today. Medalist was my goal, and I’m very excited to be moving on as a team and moving forward.”

BNL had three of the top five scores in the field (which is the smallest sectional in the state). Olivia Sanders posted an 85, and Ashley Chase had two birdies en route to an 89. Samantha Biel capped the scoring for the Stars with 101.

“It wasn’t pretty,” BNL coach Aaron Sanders said. “We weren’t real sharp, but we’ll take it. We always want to win the conference and sectional, which means we’re playing well at the end of the season.

“We didn’t score well today, for the way we hit it. We gave away some shots on the greens, we could have putted better, but that’s the way it goes sometimes. It happens. If you’re not putting well, you’re not going to score well, there’s just no way around it.

“Addyson is hitting it as well as she has all year. She just needs to clean up her putting. She was solid all day.”

Bridget Marshall carded an 88 for the Owls, while Keisha Bennett carded 83 while leading Springs Valley to the third team spot with 409.

The top three teams in the regional will advance to the state finals at Prairie View Golf Club on Oct. 4-5.