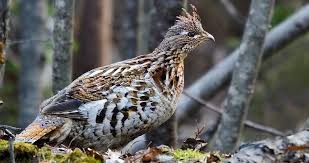 (UNDATED) – The state is considering making the ruffed grouse an endangered species.

The population of the bird has declined since the 1980s. Hunters have not been allowed to hunt ruffed grouse since 2015.

At a meeting on Tuesday night, the Department of Natural Resources responded to a citizen petition to list ruffed grouse as endangered. The agency came to the conclusion that ruffed grouse will likely be wiped out “under current trends in advancing forest succession toward more mature forests…unless there are major natural disturbance events.”

The endangered bird status would keep the ruffed grouse from being hunted or trapped for sport or commercial use. Special projects for the bird could be funded through the Nongame Wildlife Fund, which appears on Indiana income tax forms as a donation option.

The DNR said they will consider adding the bird to the endangered list as early as its next meeting Nov. 19 at Fort Benjamin Harrison State Park in Indianapolis.

Ruffed grouse are most commonly found in some of the large forested areas of south-central Indiana.

You can read more about the ruffed grouse on the DNR’s website. www.in.gov/dnr