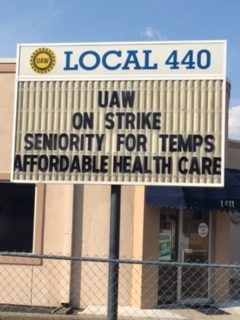 BEDFORD) –  It has been almost a week since the UAW declared a strike against General Motors and the Lawrence County community has been supportive of the workers of the Local UAW 440.

“We have been really blessed,” said Kevin Hutchinson, president of the Local UAW 440. “Several merchants have been there for us.”

“We sincerely appreciate, and send a heartfelt thanks to the community standing behind us,” said Kevin Hutchinson.

“When this concludes we will notify local media, social media and the public of the merchants that have supported the workers at the General Motors Plant,” Hutchinson added.  “Some of our striking workers have already started cutting back on eating out and making purchases.”

Local merchants have not yet felt the impact of the strike, But the longer employees are not working at GM, the deeper the impact will be to Lawrence County.

At this time, no one really knows how long the strike will last.

“I cannot comment on how talks went this week. But, it is my understanding that only 2 percent of the demands have been met at this point,” Hutchinson added.

Those that retired from GM are not affected by the strike. The International United Auto Workers have stepped in to keep medical benefits for striking workers after GM canceled the health benefits for all employees.

“At least our employees who might have faced surgery this week will not have to worry about health coverage,” Hutchinson says.

At issue are a path to permanent seniority, affordable healthcare, job security, a share of the profits, and fair wages.