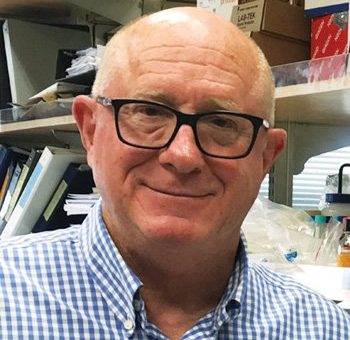 (BLOOMINGTON) – For the second year in a row, an IU alumnus has won a Lasker Award. This year’s recipient is H. Michael Shepard, who received a Lasker-DeBakey Clinical Medical Research Award.

Dr. Shepard is one of three scientists accepting this year’s Lasker Award, along with Dr. Dennis J. Slamon, and Dr. Axel Ullrich —who invented Herceptin, the first monoclonal antibody that blocks a cancer-causing protein, and developed it into a life-saving therapy for women with breast cancer.

The innovation reduces the risk of recurrence and extends survival time for patients with metastatic as well as early-stage disease.

Every year, more than 50,000 women in the US are diagnosed with the type of breast cancer that the drug attacks and more than 2.3 million individuals have received the treatment since it became available.

Herceptin has also been proven to be effective in treating ovarian and gastric cancer patients.

Dr. Shepard is an innovator in the field of biotechnology and pioneer in cancer research. He earned his Ph.D. in molecular, cellular and developmental biology in 1977 from the IU Bloomington College of Arts and Sciences’ Department of Biology, where he also completed postdoctoral training as a Damon Runyon-Walter Winchell Research Fellow. He returned to the Bloomington campus in 2018 as an IU visiting scholar to speak to biotechnology students.

The Lasker Awards, established in 1945 by the Mary and Albert Lasker Foundation, are widely regarded as America’s top biomedical research prize, with nearly 90 past recipients going on to win a Nobel Prize.

Last year’s alumni recipient was C. David Allis, who won an Albert Lasker Basic Medical Research Award for a fundamental discovery that opens up a new area of biomedical science.