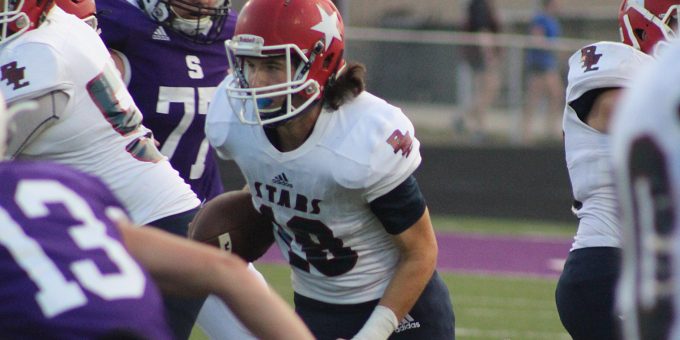 (SEYMOUR) – Well, nobody saw that coming. From the brink of dysfunction and implosion, Bedford North Lawrence fought though multiple layers of adversity and stunned one of the Hoosier Hills Conference leaders.

Down, ready for the write-off with the season only at its midpoint, the Stars summoned inner strength that had not been seen, conquering Class 5A No.15 Seymour 24-21 on Friday night. Justice Woods grabbed a 7-yard touchdown pass for the game-winner with 16 seconds left, igniting a joyous celebration and saving a season.

One week after a lackluster loss, BNL (2-3, 2-1 in the HHC) rebounded with a road triumph that will rank among the most unpredicted in Steve Weber’s seven-year tenure. The Stars shut down one of the state’s prolific running backs and drove for the final score with virtually every tangible working against them.

Yet here they came, following a Justice Woods fumble recovery with 4:44 left, marching 61 yards and using almost every precious second for a gut-punch touchdown as Seymour (4-1, 3-1 in the league) suffered its first setback. Unbelievable, unpredictable, just amazing.

“Way to fight!” Weber’s first words in the postgame team huddle. That part of BNL had been questioned. It was answered on that final drive, answered during a first half that saw the Stars dominate for a 10-0 lead.

“That’s a life lesson,” Weber said. “You don’t stay down. You keep battling and good things happen. I’m tickled to death we didn’t lay down and roll over. The team could have gone south. They didn’t.”

That last drive was edge-of-the-seat tension and execution. Two third-down conversions, a daring fourth-down quarterback scramble by Nikirk when everyone in purple expected pass, and the final Nikirk fling into the right corner of the end zone, where Woods was wide open and waving frantically.

“I was wide open, jumping up and down, trying to get him to see me,” Woods said.

BNL started on solid footing, driving 80 yards on the first series. Nikirk hit Derek Hutchens for a key 38-yard gain to set up a Woods 1-yard burrowing into the end zone. The Stars added a 35-yard field goal by Ethan Baer with 4:09 left in the half and took that 10-0 lead to intermission.

Seymour, of course, made the Stars squirm. First play of the second half – zap. Brendan Smith hit Drew Vehslage with a quick slant, and one missed tackle later he was 80 yards away in the end zone for the first Seymour score.

The Stars answered that with Nikirk’s 48-yard connection to Gavin Scherschel for a 16-7 lead midway through the third, but that wasn’t safe. Smith found tight end Brayden Barker for a 36-yard score on fourth down on the last play of the third. Chandler Drummond, beat down like a drum for most of the night, escaped for a 44-yard burst and later scored from 10 yards, giving the Owls a 21-16 lead.

When BNL’s next series ended with a bad punt snap, setting up the Owls in BNL territory, the Stars appeared doomed again. Not so, doubters, of which there were many. BNL’s defense jarred the ball loose from Seymour’s Colin Greathouse, and the Stars seized the opportunity.

“It was crunch time. That’s all we really needed,” Woods said.

“We knew we had to win it on that drive,” Nikirk said. “That was it. If we didn’t we could be devastated. But I wasn’t freaking out.”

Nikirk finished 9-of-17 for 179 yards and two touchdowns, while Woods did a lot of tough interior work and rushed for 76 yards.

“Who executed,” Seymour coach Michael Kelly said when asked about the difference. “That’s what the game came down to. They took care of the ball, managed the clock, and that No.3 (Woods) is a player.

“At the end of the day you can’t play like we did and beat teams like BNL. We didn’t have it tonight.”

Drummond, who ranked 12th in the state in yards before meeting BNL’s swarming defense, was limited to 99 yards (half on one chunk). Smith was 8 of 16 passing for 177 yards but was picked off twice by BNL’s Zane Harrison.

“That was an awesome game,” Weber said. “Everybody needed that. This is the first game they battled all four quarters and wanted to win. The emotion, the intensity, it was all there.”

“It’s a great confidence booster,” Nikirk said. “Getting this win helps us tremendously.”

The week past, the loss to Madison and its aftermath, was quickly forgotten.

“It’s made us want to fight harder, prove everyone wrong,” Woods said.

The Stars will return home to face Terre Haute South next week. The Braves, ranked No.5 in 5A, fell to Bloomington South 44-0.