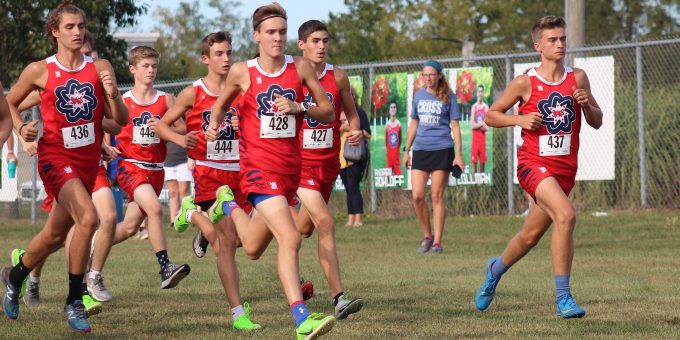 (BEDFORD) – Bedford North Lawrence turned back the clock while basically racing against it during an old-school dual meet with Martinsville on Tuesday afternoon.

Without a charging herd of competitors and the adrenaline rush of a major invitational atmosphere as motivation, the Stars found other ways to keep time from rushing away. They couldn’t stop the ticks, but they made every one count.

BNL’s boys team, with a pack mentality, dominated the Artesians by a 21-47 count, while Grace Tanksley churned to an individual triumph in the girls meet as Martinsville won that one 24-39.

Dual meets are scarce among major programs, with emphasis and training schedules based on the weekend monster meets. But Tuesdays are also a key workout practice day, so the one-on-one clash with Martinsville accomplished a dual purpose – a hard workout with a competitive edge.

Hand timing (well, except for a phone app replacing a stopwatch) and paper scoring was a step back in modern high-tech timing, but the Stars took a step forward. BNL claimed four of the top five spots in the boys race, and Tanksley ran a race to tactical perfection in the second tour of the 3.1-mile layout.

“These dual meets are a blessing as a workout,” BNL coach Jon Calhoun said. “You want to have that race atmosphere to give them a little push, but it’s low key, not as stressful.”

The Stars were in the final stages of recovery mode from the high-energy Eagle Classic at Brown County, yet several posted their course-best times on a hot afternoon not necessarily conducive to fast finishes.

“It was a little tough, but I felt pretty good,” Lanham said. “My body felt good, my breathing felt good. Everything clicked for me. The last mile was tough but I was able to push through it.”

Tanksley, a notorious slower starter, kept on the back shoulder of Martinsville’s Alina Worzella, who had finished 18 seconds in front of Tanksley at Brown County. Not this time. Tanksley made her move on the second half of the course and chugged home in 22:03.5.

“Grace’s intention was to battle for the top spot,” BNL coach Jill Vance said. “She was really going for that. If anyone ever executed a race strategy, it was her. She did it exactly.

“This course plays a lot more to her strengths. She doesn’t go out super fast, she’s more measured in the first mile. Her strength is always that middle part, when everyone else starts to fail. That’s where she starts moving.”

Tanksley, short on stride but big in heart, waited for Worzella to slow down.

“I was staying behind her, waiting for her to kill herself on the hills,” Tanksley said. “It was hard to breathe. I just kept my head up, kept my eyes on her. I knew I could do it.”

Worzella was second in 22:52.8, leading the Artesians to four spots among the top six finishers.

“Our intention was to treat this like a more competitive way to do a hard workout,” Vance said, who was missing a couple of top runners from the normal scoring lineup. “Our strategy was focusing on splits, working on the second mile to get it evened out, working on maintaining motivation.”

BNL’s boys team will compete in the Crawford County Invitational on Saturday.