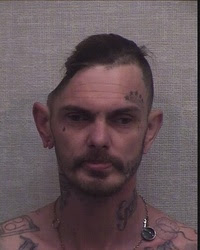 (MEDORA) – An Austin man was arrested Monday after police were called to the 200 block of Poplar Street after a report of a man attempting to gain entry into a home.

When deputies arrived, they found 30-year-old Johnathon Clark on the front porch of the house.

Deputies attempted to arrest Clark, but he began resisting. A Brownstown police officer arrived to assist in the arrest.