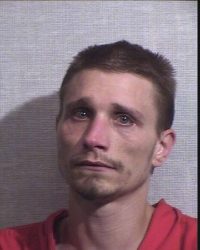 (BROWNSTOWN) – A Seymour man was arrested after police say he failed to register as a sex offender.

Officers found him living in Hillview Trailer Court in Brownstown.

Quick failed to report to the Jackson County Sex Offender Registry that he had moved from Seymour.

According to police, sex offenders are required by law to report a new address within 72 hours of moving.

Officers found Quick at a Brownstown gas station. He was arrested on a charge of failure to register as a sex offender and transported to the Jackson County Jail.