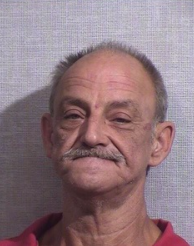 (SEYMOUR) – A Versailles man was arrested on Thursday after Seymour police say he threatened a truck driver with a machete and a hammer.

Police officers were called to the Travel Centers of America on East Tipton Street at 1:49 p.m.

Police say Blackburn had parked his semi in a semitrailer handicap spot without a handicap plate and the other driver needed that spot to park.

The truck driver asked Blackburn to move, and the two exchanged words.

Police say Blackburn then grabbed a machete and a hammer and threatened the truck driver.

He was later seen driving his truck without the trailer along Stevens Way. Police ordered Blackburn to exit the semi and get on the ground. He exited but continued to walk toward officers.

Blackburn ignored several commands, and officers could see that he had something in his waistband after multiple warnings officer used a stun gun to stop Blackburn. He was placed in handcuffs. After being medically cleared, he was transported to jail.