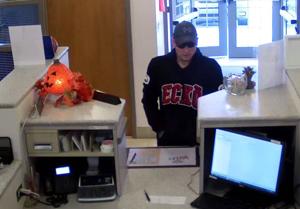 (BLOOMINGTON) – The Monroe County Sheriff’s Department is looking for this man who is a suspect in robbing Crane Credit Union located at 3885 West Jonathon Drive in Bloomington.

Officers were alerted to the armed robbery Thursday afternoon.

Police say the male handed a bank teller a note that said: “keep your life, give me the $”. The teller told police she thought she saw something, possibly a weapon protruding toward her under the man’s hoodie, but never actually saw a gun.

The teller placed an undisclosed amount of money in the bag, and the man fled.

The suspect is in his early 20s, between 5-foot-10 -inches and 6 feet tall between 150 to 160 pounds. He was wearing a ball cap, sunglasses, a long-sleeved hooded sweatshirt, and gloves.

Anyone with information is asked to call the Monroe County Sheriff’s Department at 812-349-2534.