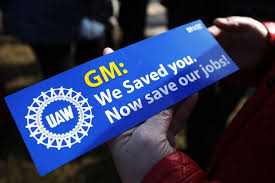 The UAW is committed to collective bargaining and the best interest of its membership, Hutchinson added.

Hutchinson and Chairman Chad Millspaugh were in Detroit on Saturday.

This morning, the United Auto Workers Union announced that its roughly 49,000 members at General Motors plants in the U.S. will go on strike Sunday night because contract negotiations with the automaker have broken down.

The decision came after about 200 plant-level union leaders voted unanimously in favor of a walkout during a meeting Sunday morning in Detroit.

If there is a strike, it would be the union’s first since a two-day work stoppage at GM in 2007.

On Friday, union leaders extended contracts with Ford and Fiat Chrysler indefinitely, but the pact with General Motors was still set to expire Saturday night.