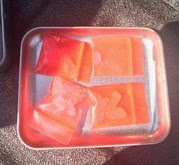 (SELLERSBURG) – On Wednesday, a Jeffersonville resident was arrested on drug-related charges and an outstanding warrant for failure-to-appear from Washington County.

Around 2:20 p.m. Trooper Andrew Taylor observed a red Ford Windstar in the middle of an intersection after the driver failed to stop in time for a red light. The trooper noticed the vehicle’s license plate expired in July.

The driver, 40-year-old Monica A. Cole, of Jeffersonville, was stopped for the violations.

Trooper Taylor discovered that Cole was wanted on a warrant out of Washington County. Police also found meth, marijuana and other drug-related items in the vehicle.