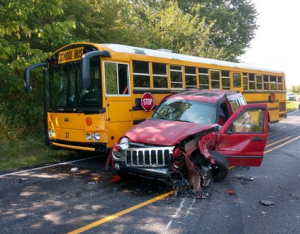 Indiana State Police say that at about 2:40 p.m., a car driven by 27-year-old Shanaya Brown, of Columbus, was traveling southbound in the 11000 Block of South State Road 11.

Brown’s vehicle was being followed by an SUV driven by 71-year-old Jack Cooper, of Seymour.

Brown slowed for traffic ahead of her. That’s when Cooper’s vehicle swerved into the northbound lane of State Road 11 to avoid a collision into Brown’s car.

The SUV then collided with Brown’s car.

Hernandez-Zarate’s vehicle then struck a school bus being driven by 68-year-old Daniel Ginger, of Seymour.

The bus was traveling south on State Road 11 behind Cooper’s SUV.

Police say there were approximately 33 students on the bus at the time of the crash.

Jack Cooper and Maria Hernandez-Zarate were both transported by ambulance to Columbus Regional Hospital for treatment of non-life threatening injuries.

A 17-year-old female student who was on the bus was also transported to Columbus Regional Hospital for non-life threatening injuries.

State Road 11 was closed for nearly two hours for crash investigation and cleanup.

Troopers say the investigation is ongoing.