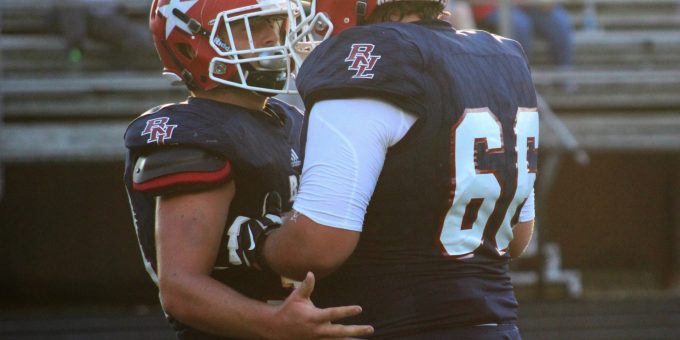 (BEDFORD) – Winning, that cure-all elixir, that magical medicine, “isn’t everything,” legendary Alabama coach Bear Bryant once growled, “but it beats anything that comes in second.” Bedford North Lawrence had enough of the alternative.

After two weeks of misery, the Stars soaked in success, and exhaled a little. They can breathe again. That is, after all, the priorities of life according to former Yankees owner George Steinbrenner: “Breathing first, winning next.”

Last week’s 50-21 conquest of Jennings County unleashed a sense of relief, stoked the fires of confidence. BNL certainly needed that, from so many standpoints, just in case some had forgotten what it’s like. The impact can’t be overstated.

“It was awesome,” BNL senior Justice Woods said. “We needed to get a W under our belts. We have a lot of first-year starters who hadn’t gotten to experience it at the varsity level. That first win, and showing everyone what we can do, really helped us.”

“It was huge, not just for the team but for the coaches, the school in general,” BNL coach Steve Weber said. “It was a good win. We played a lot better, played with more emotion, played physical. A lot of good things came out of it.”

So what comes next? In football, it’s the next week, proving one’s worth again, and that means a clash with Madison, which is currently going through another season of struggle. That would shift drastically with a victory at BNL on Friday night.

The Cubs (0-3) started a new era with first-year coach LeRoy Wilson, a former assistant at Seymour, Charlestown and Providence. Madison showed promise in its opener, a 34-26 loss to Paoli, but it suffered losses to South Dearborn (34-0) and Seymour (49-7) since.

Weber, keeping in mind how fragile and fleeting success can be, warned of an excess of optimism. Madison has a capable weapon in quarterback Parker Jones (31 of 65 passing for 488 yards and 4 TDs).

“They’re much improved, they’re a physical team, they have some size and speed,” Weber said. “The problem is they’re not deep. So they hang with people and then wear out. We’re in the same boat they are. It will be which team can go harder the longest.”

BNL’s triumph came with a price – injuries. Running back Skyler Bates went down late in the first half with a wrenched left knee, and he’s highly questionable while awaiting the results of a scheduled MRI. Outside linebacker Ben Cosner could miss considerable time with a shoulder injury. Offensive linemen Reece Bailey is hobbled.

“We have some question marks and all of them would be devastating hits,” Weber said. “We have some guys we’ll throw right in the fire.”

The Stars will need offensive production from senior quarterback Dalton Nikirk (10 of 15 passing for 226 yards last week) and the stable of running backs who stepped into the Bates void for the business end of the triple-option attack. Derek Hutchens caught 5 passes for 187 yards.

“We still have work to do, and a lot of it is mental,” Weber said. “We’re still blowing a lot of things we should know. We’ve got work there. But the aggressiveness and physicality has picked up, which is good to see. I was beginning to think we were going to be a soft team, but we weren’t.”

The Cubs have been vulnerable to big-play passing attacks, both last year (BNL’s McCall Ray threw 5 TD passes in last year’s 55-19 win at Madison) and this season (South Dearborn’s Adam Dixon was 17 of 24 for 284 yard and 5 TDs). On the flip side, BNL must prove its ability to stop the run. Nothing can be taken for granted.

“It’s like any other game,” Woods said. “We can’t underestimate them. We thought we were better than what we were, and we can’t do that any more.”

BNL has won five straight in the series and 28 of 31 overall. But that history doesn’t mean as much to the current Stars as last week’s performance. They are such creatures and captives of the moment.

“It was a huge confidence boost for the team, it definitely boosted the morale of our practices,” senior offensive lineman Cale Bunch said. “That helps us prepare.”

Last meeting: Last year at Madison, McCall Ray completed 5 passes – all for touchdowns – as the Stars stormed to a 55-19 victory. Drew Shoufler caught three passes for 126 yards. Jace Humes ran for 99 yards for the Cubs.

Game notes: Madison has won four games the last four years combined, and the Cubs have had only one winning season (2014) since 1992.