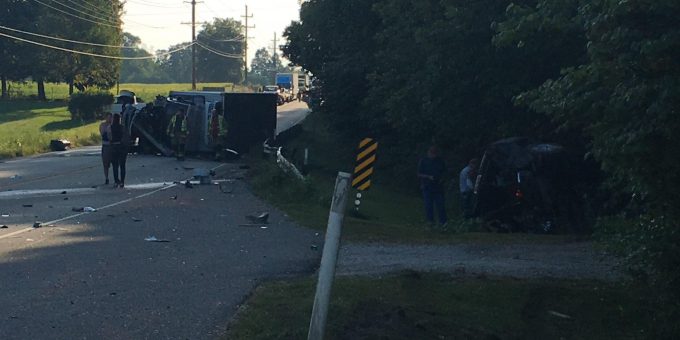 (BEDFORD) –  A Cosner’s Ice truck landed on its side on US 50 East, just east of the State Road 446 Intersection Tuesday morning.

The accident occurred around 8:26 a.m.

According to a Lawrence County Sheriff’s Department report, 20-year-old Ethan Aubrey was driving the Cosner’s Ice truck east on US 50 when he struck the rear of a pickup truck driven by 64-year-old Dennis Campbell, of Heltonville.

Police say Campbell had stopped to pick up a hitchhiker and the rear of his vehicle was partially in the roadway.

Aubrey told police he was looking down at his GPS and did not see Campbell’s truck. After impact, the Cosner’s truck flipped on its side.

The accident blocked traffic for several minutes on US 50 while emergency crews worked the accident and cleaned up the debris from the crash.

Both were checked out by medical personnel at the scene but refused to go to local hospitals for treatment.

Assisting at the scene were first responders from Bedford and Shawswick Fire Departments, Indiana State Police, and AMR Ambulance Service.