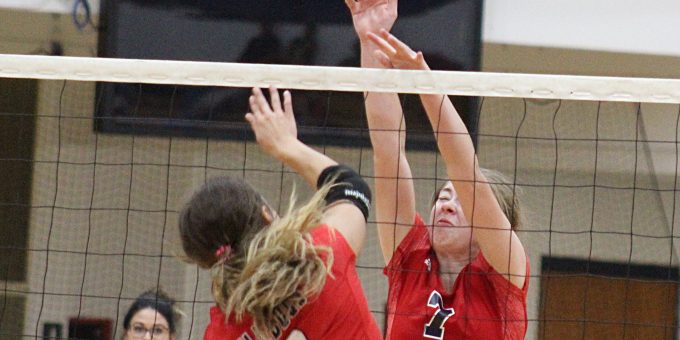 After a punishing first set, the Stars displayed a burst of snarling and growling, took an early lead in the third set, and dared to bark at New Albany. But firepower did more damage than will power as the Bulldogs finished off a sweep of the Stars on Tuesday night.

The Bulldogs dominated from the service line and controlled the net. Bree Martin hammered 7 aces, and Tess Owsley knocked down 8 kills as the Stars struggled to counter attack with poor passes. That’s a bad combination.

“We served tough, really tough, mixing up pace, serving deep,” New Albany coach Ryan Woosley said. “Our serve was able to give us a lot of free balls to dictate the pace of the game. Our hitters were in good situations to score.”

Dani Grant and Riley Winslow added 7 kills each for the Bulldogs, who had to rally from two deficits in the third set (BNL broke to 4-1 and 8-5 leads) but otherwise controlled every aspect.

“We came out flat,” BNL coach Jordan Robbins said. “We’re intimidated all the time. Confidence is something I don’t know we’re going to get. I hope we do.

“After the first set, we talked about acting like that didn’t happen, reset, play our game at our speed, and compete. They had more grit the second and third sets. But we’re not playing to our consistent capability.”

BNL’s serve reception was a sore spot, reflected in the statistics. Annie Waggoner was 8 of 8 serving with 7 digs but had only 8 assists. Autumn Hall was 7 of 7 serving with 2 kills, Haley Deckard had 2 kills and 6 digs, and Myla Bergman totaled 9 digs.

“That (passing) killed us,” Robbins said. “We spent almost entire practices this week on that. We’ve got to pass to do anything else. We’ll just continue to work it. We’re running out of time when it comes to a turnaround, but we will regroup and get back to the basics. We have to have a little more out of each of them.”

New Albany took BNL seriously, having learned the letdown lesson earlier this year when dropping a set against Austin after winning the previous one 25-5. The Bulldogs also have a huge clash with rival Floyd Central looming on Thursday. They did not fall victim to the trap-game scenario.

“It’s about coming in and giving your best every single night, rather than dropping down to your opponents’ play,” Woosley said.

The Stars were still without the services of sophomore Merritt Callahan, who is sidelined while working through concussion protocol.

BNL will host Class A No.2 Trinity Lutheran on Thursday.